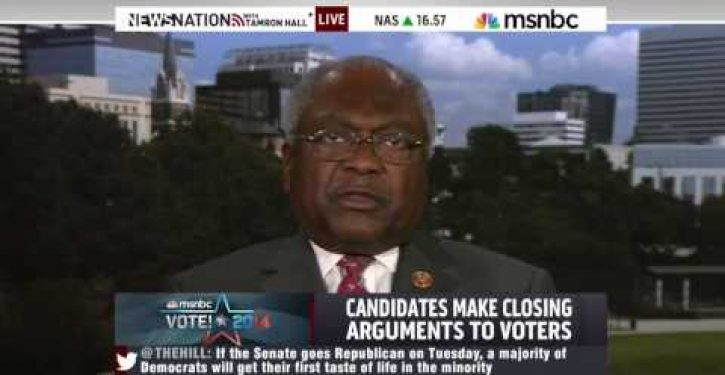 There are many ways of reading last night’s victory by Republicans who now control both houses of Congress. One way of looking at the election is as a repudiation of Barack Obama’s failed policies, which left the nation stagnating and divided over the past six years.

Not everyone, however, adopts that view. One person who doesn’t is himself a member of Congress. He Rep. James Clyburn (D-S.C.), and he was a guest on Monday’s “News Nation” with Tamron Hall. The topic was the next day’s midterm election. Clyburn, the number-three Democrat in the House, said his party shouldn’t have run away from the President in the days and weeks leading up to the election but should have supported his many successes. Clyburn went on to add that regardless of what does, “he’s not going to be acceptable because of his skin color.”

Clyburn complained that there “are so many people afraid of being too closely identified with President Obama.” The reason they don’t want to be identified with his agenda is because his successful programs have been demonized by Republicans.

And the reason for that? After Hall played the controversial Mary Landrieu comments about race, Clyburn gave his answer: racism.

Hall: Our first-read team basically says the GOP said Obama stinks, that’s the quote there and the Democrats never countered that.

2014 midterm elections: A pictorial guide to the day after
Next Post
A freshly pummeled Harry Reid announces his plan to run for Senate Minority Leader