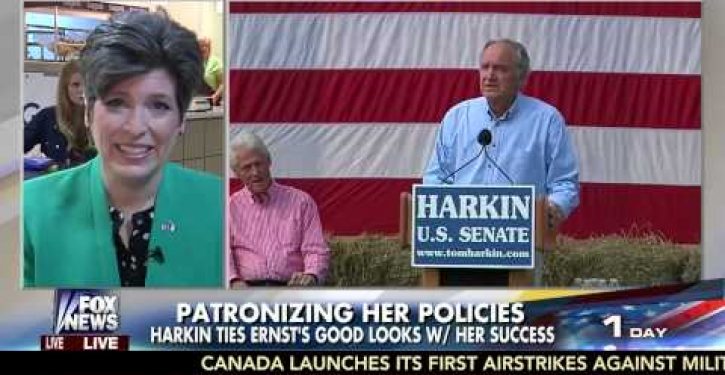 GOP candidate for a U.S. Senate seat from Iowa, Joni Ernst, appeared on Fox and Friends Monday morning to answer Democratic Senator Tom Harkin’s offensive attack on her the day before in which he implied that her seven-point lead in the race was because she is “attractive” and “sounds nice.”
Ernst wasn’t standing for the Democratic Party war on this woman, saying:

The full segment including Harkin’s statement is embedded below.

The real irony of course is that the Democrats, inventors of the “war on women,” would go utterly ballistic of a comment like this were made about a females candidate running on their own ticket. Then again, the war on women and the race card, which the left has been playing like it’s going out of style in this election season, are cynical props meant to attract low-information voters to the polls.

Lib columnist: Obama’s problem is he’s surrounded by suck-ups (Video)
Next Post
Picture of the Day: Street art popping up nationwide in support of GOP candidates