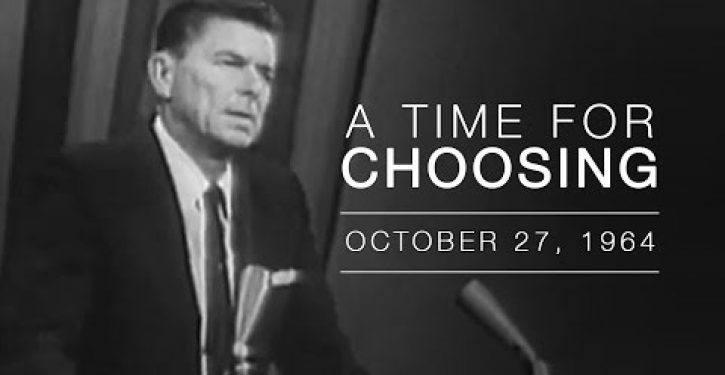 A number of media outlets have published reflections on “The Speech” today.  27 October marks the 50th anniversary of Reagan’s seminal speech given in 1964, as a campaign booster for Barry Goldwater.  A selection of comments appears below — and, of course, a video of the speech, courtesy of the Reagan Presidential Library.

It was a different Ronald Reagan than the one many Americans remember as president who gave “The Speech” that night. As historian Steven Hayward noted in the Washington Post on Sunday, it “was not the avuncular, optimistic Reagan of his film roles, or of his subsequent political career that emphasized ‘morning in America’ and the ‘shining city on a hill,’ but a comparatively angry and serious Reagan, serving up partisan red meat against liberalism and the Democrats” (whose party he had been a member of only two years before).

In the middle of the Cold War Reagan forthrightly said liberals refused to acknowledge that “There is no argument over the choice between peace and war, but there is only one guaranteed way you can have peace — and you can have it in the next second — surrender.”

On domestic issues, Reagan was equally blunt. “Now, one side in this campaign has been telling us that the issues of this election are the maintenance of peace and prosperity,” he said. “The line has been used, ‘We’ve never had it so good.’ But I have an uncomfortable feeling that this prosperity isn’t something on which we can base our hopes for the future.”

In a message that would resonate profoundly if given today, he warned against the intrusive power of a faceless state. “I think it’s time we ask ourselves if we still know the freedoms that were intended for us by the Founding Fathers.”

It was a deeply contrarian speech when the hope of a “Great Society” was at a peak, when it was still possible to believe we could win decisively in Vietnam and housing projects were a sure stepping stone to a better life.

“If government planning and welfare had the answer, shouldn’t we expect government to read the score to us once in a while?” Reagan asked, “Shouldn’t they be telling us about the decline each year in the number of people needing help? But the reverse is true. Each year, the need grows great, the program grows greater.”

All good speeches have a consistent theme, and Reagan’s was mistrust of government and faith in the individual. As he would later prove in sweeping victories, it was a message he believed transcended ideology and party. …

Read today, the speech still vibrates with a passionate intensity rarely found in any contemporary political discourse. This wasn’t a focused-grouped, calculated appeal to different constituencies. It was the voice of one man, deeply troubled by the course of his nation.

Look back on that “Time for Choosing” speech and contrast it with the Karl Rovian politics of GOP moderation that is causing such heartburn with conservatives. A few months back, for example, Mr. Rove noted: “Full disclosure: I donated to Mr. Cochran’s campaign and the super PAC that I help, American Crossroads, donated to Mississippi Conservatives in the primary and runoff.” Was the victory of Mississippi Senator Thad Cochran really a victory for conservatism — or Washington’s lobbying crowd? …

Reagan did not dilute his message. Reagan made the conservative case in bold, principled terms, over and over again. He did not seek to “move to the center”; instead he determined to move the center to the right. And he succeeded. The reason for the miserable ratings accorded the GOP in these polls is precisely that the party is seen as not standing for anything other than holding power. …

Why did Ronald Reagan win those landslides? Why did George W. Bush have such a difficult time winning and keeping the White House? Why did Mitt Romney and John McCain lose? Why is the Tea Party so powerful?

All one has to do to understand is re-visit that “Time for Choosing” speech from fifty years ago this month. It’s all right there — if one cares to look.

Why did Reagan, whose speech seemed very much in the spirit of Goldwater’s campaign, create such a sensation? How did he succeed where Goldwater failed?

The simplest explanation, and a favorite of the critics who later dubbed Reagan the “Teflon president,” is that he was just a better messenger than Goldwater. …

But he would not have been so successful for so long with appeals to emotion alone. “A Time for Choosing” reveals a coherent political philosophy that differed in subtle ways from the main current of conservatism, blended with great skill and art in Reagan’s rhetoric.

Reagan delivered a deeply ideological speech, with strong attacks on liberalism and its vessel, the Democratic Party of LBJ’s Great Society era. “In this vote-harvesting time,” Reagan said early in the speech, “they use terms like the ‘Great Society,’ or as we were told a few days ago by the president, we must accept a greater government activity in the affairs of the people.”

At the same time, Reagan made great efforts to transcend partisanship by portraying his views as common sense: “You and I are told increasingly we have to choose between a left or right. Well, I’d like to suggest there is no such thing as a left or right. There’s only an up or down: man’s old, old-aged dream, the ultimate in individual freedom consistent with law and order, or down to the ant heap of totalitarianism.” …

Reagan also understood that narrative can be more effective than abstractions or slogans alone. Goldwater and conservative intellectuals back to Robert Taft tended to argue from abstract principles, with less emphasis on story and concrete examples. Reagan’s rhetoric represented a potent shift. After a blizzard of numbers about government profligacy, he turned to a vivid story:

“Not too long ago, two friends of mine were talking to a Cuban refugee, a businessman who had escaped from Castro, and in the midst of his story one of my friends turned to the other and said, ‘We don’t know how lucky we are.’ And the Cuban stopped and said: ‘How lucky you are? I had someplace to escape to.’ And in that sentence he told us the entire story. If we lose freedom here, there’s no place to escape to. This is the last stand on Earth.”

And these, perhaps the best remembered lines of a much-quoted speech, resonate as never before with Americans who prize liberty today.

You and I have a rendezvous with destiny. We will preserve for our children this, the last best hope of man on earth, or we will sentence them to take the first step into a thousand years of darkness. If we fail, at least let our children and our children’s children say of us we justified our brief moment here. We did all that could be done. 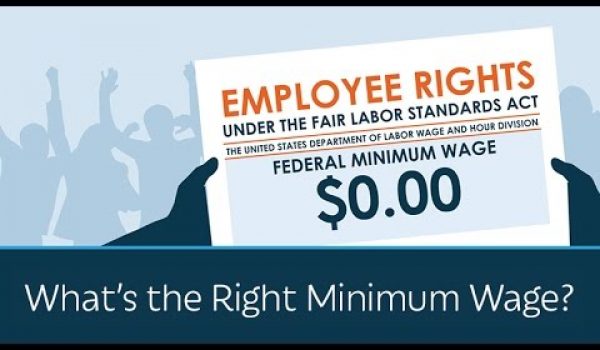 Video: Prager U. asks ‘What’s the right minimum wage?’
Next Post
What kind of parents take their 5-year-old to a country with an Ebola outbreak? *UPDATE*