Whether you are a Democrat, Republican or simply a political junkie the biggest Election Day question is will the Democratic Party retain control of the Senate or with the Republicans take over.

Based on an analysis of each of the races, plus some national data, if trends continue Republicans will net at the six-senate seats it needs to take control of the Senate. The prediction here is that they will win new seats total, but may lose two seats they currently hold. But that could change on a dime. Most races are so close that they could turn around even as late as next weekend the one immediately prior to the election.

The chart of races above includes 13 total senate races, the top ten are currently held by Democrats, the bottom three are close races for current GOP held seats.  The columns  include the Real Clear politics average followed by the current evaluations for each race from the three big prognosticators Charlie Cook, Stuart Rothenberg, and Larry Sabato. Finally on the Right are the current evaluations by race from yours truly.

In the Senate today Democrats (including independents who caucus with Democrats) have 55 seats. The GOP needs to pick up a net of six seats to take over the Senate. Should they pick up only five, resulting in a 50-50 tie the Senate would remain in Democratic hands because per the Constitution the Vice President casts the deciding vote.

In three Senate seats currently held by Democrats retiring this year the Republicans have impressive leads and lieu of major disasters will flip to the GOP. In Montana Republican Steve Danes leads by 18%, South Dakotashows Republican Mike Rounds with a 10% advantage, and Shelley Moore Capito the Republican in West Virginia’s lead is almost 17%.

It looks like at least five of the remaining seven Democratic Party held seats will switch sides in the coming election:

Alaska: The seat currently held by Democrat Mark Begich will switch back to the GOP. Generally the polls show Republican Dan Sullivan with a small lead of 4-5% that has been increasing over the past six weeks.

The state’s voter base is strongly Republican with a R+12 rating in Charlie Cook’s PVI index (based on the average Democratic or Republican Party’s share of the two-party presidential vote in the past two presidential elections vs. the nation’s average share of the same). A major reason the Democrat Begich overcame this disadvantage in 2008 was the incumbent Republican Ted Stevens was wrongly convicted of corruption (the charges were over turned after the race and the prosecutors were cited for malfeasance). Despite that Stevens was seen as corrupt Begich won by fewer than 4K votes.

Arkansas: Looks like it will flip to the GOP. Another state with a strong Republican voter base (R+14), which will change parties on Election Day. Democratic incumbent Mark Pryor had a 1% lead on July 1st. However Republican Tom Cotton has run a very impressive campaign and now holds a lead of about 5%. A recent revelation that Pryor’s college thesis had argued that the “state had suffered enough” from the federal desegregation efforts in the 1960s may damage the Democrat amongst the state’s African-American voters.

Colorado: Colorado has a D+1 rating meaning the state is a pretty evenly split between Democrats and Republicans. The numbers show the senate race is still very close but based on trends it seems as if Republican Cory Gardner has the momentum over incumbent. He now leads by about 3% in the polls after trailing by the same amount a month ago. However this will be the first Colorado race with mail-in voting and it is not known how that is skewing the polls and the voter models by changing the voter base.

Iowa: Another D+1 state. After being tied most of the summer Republican Joni Earnst has opened up a slight 2-3% lead. Most political observers didn’t believe Ms Earnst would even win the primary, but the Army veteran’s first commercial that jokingly spoke of castrating pigs turned that all around.

In the fifteen polls released by various sources since mid-September Earnst has trailed in only two. The only news Democrat Bruce Braley has had in recent weeks is two campaign appearances by the first lady; on the first she kept getting his name wrong and the second her staff said Braley was running for Governor. Pigs in Iowa should be very worried because the prediction here is that Earnst will win in a very close race.

Louisiana: This state is holding an open primary on November 4th. Which means there can be more than one candidate per party. If no candidate receives more than 50% of the voting total there will be a runoff on December 6th. And that’s precisely what will happen next week. Incumbent Mary Landrieu is trending toward a 4-5% victory in the primary but generates >40% of the vote. Republican Bill Cassidy at 35% is fighting against both Landrieu and fellow Republican Rob Maness who may get around 9% of the vote. Landrieu has been strongly damaged by recent scandals revealing she used federal funds for campaign trips and that she spends a very limited time in he district. Landrieu, who is married with three kids, does not own a house in the state and lists her parent’s house as her primary residence for voting purposes.

The same polls that predict a Landrieu victory in the Nov. 4 primary also show a Bill Cassidy victory in a head to head run off in December. This will be a Republican pickup, but not until December.

In North Carolina incumbents Democrat Kay Hagen has held a slight lead over Republican Thom Tillis during throughout the campaign. Although the race has been tightening primarily because Tillis has a ten point lead amongst independents, the race could flip but as of now the prediction is North Carolina will stay in Democratic hands.

New Hampshire is in a similar situation; the only difference is that this race was supposed to be a blowout by Democratic incumbent Jeanne Shaheen, Republican Scott Brown has the momentum in this race, especially after the Democrat’s awfull performances in recent debates, but it looks like Shaheen has enough to squeak out a victory on Election Day.

The three GOP held seats to keep an eye on are Kentucky, Kansas, and Georgia.

Once a close race, Kentucky voters will reelect incumbent Mitch McConnell over Secretary of State Alison Lundergan Grimes. Based in Ms. Grimes’ recent gaffes including not admitting she voted for President Obama in the last election, McConnell’s lead will continue to widen. Look for a 6-8% McConnell victory.

The Kansas Democratic Party’s move, getting their candidate to drop out making it a two-person race between independent Greg Orman (who despite what he claims will caucus with the Democrats) and Republican incumbent Pat Roberts seemed like a masterstroke. Orman has maintained an ever-shrinking lead over Roberts. An eight-point lead in mid September has shrunk to a lead of less than a percentage point. I wouldn’t be surprised if Roberts overtakes Orman in the last few days of the campaign. I also wouldn’t be surprised if Orman holds on, as there is a huge anti-incumbent sentiment. This race is too close to call.

Georgia may be a Democratic Party pickup, but odds are we wont know which way this race goes until a runoff on Jan. 6th. Republican David Perdue had led most of the way, but since the beginning of October Democrat Michelle Nunn has been rising and now has a tiny lead. Chances are neither candidate will get 50% throwing it into a runoff leading to a highly competitive runoff three days after the new Senate meets. This race is too close to call.

That’s the prediction the GOP will win up to eight new Senate seats, the Democrats may take up to two from the GOP.

For those of you who like to go to sleep early keep your eyes on New Hampshire and North Carolina. If either of those races go to the Republican candidate there is no need to stay awake further, it will be a GOP wave election. On the other hand if the Democrat wins in Kentucky or Arkansas fire up the coffee-maker it’s going to be a late night.

Look for one last overview the day before the election. 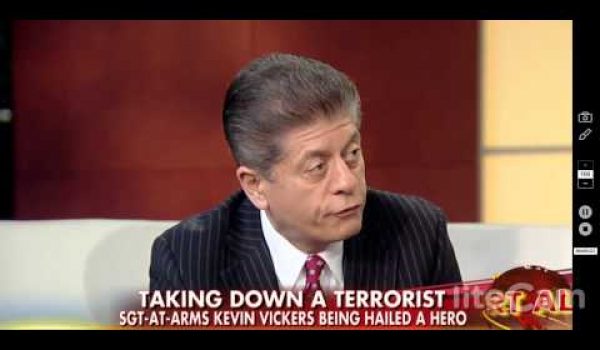