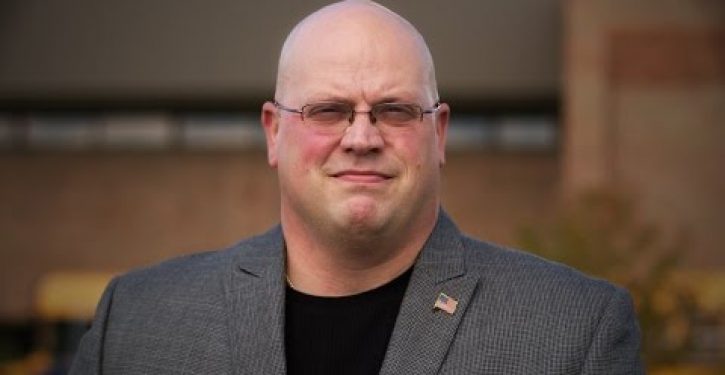 A Michigan high school social studies teacher has filed a lawsuit against his school district and the local teachers union after the district deducted $80 in union fees from his paycheck–even though he had opted out of union membership.

While taking a sabbatical from teaching at the Brighton Public School District to serve a tour of duty in Afghanistan, U.S. Army veteran Adam Neuman discovered firsthand what freedom was all about–and it’s not paying money to an organization you’re not a member of and whose views you don’t agree with, according to the Mackinac Center Legal Foundation, which filed the suit on his behalf.

“I don’t feel that they should be taking money out of my check if I am not part of the union,” Neuman told FoxNews.com. “The law is clear. I’m no longer required to pay dues. It’s as if they are punishing me for not staying in the union.”

Upon investigating, Neuman learned that the union deduction was not considered dues, but something called “release time” — money earmarked to pay the salary of the union president. Teachers who double as union officers have half their salaries paid by the school district and the other half by the union. Under the current contract, all teachers, even those who opt out, must chip in for the union’s share.

Under Michigan’s Right to Work law, neither union membership nor the payment of “any dues, fees, assessments, or other charges or expenses of any kind or amount” may “be required as a condition of obtaining or continuing public employment,” the Mackinac Center notes.

“This isn’t about the money,” Neuman, 40, told Fox. “It’s a matter of principle for me. I believe my rights are straightforward and clear.”

Neuman’s complaint, filed last month in Livingston County Circuit Court, seeks an injunction, legal fees and a $500 fine against the union and the board of education.

“What part of opting out does the union not understand?” asked Patrick J. Wright, vice president for legal affairs at the Mackinac Center. “They are not allowed to raid a non-member’s paycheck. Adam fought for freedom overseas, and he just wants to exercise it back home.”

It’s not Neuman’s first fight. The married father of two joined the Army Reserves in 2008 after hearing about several of his former students who were being recalled to active duty under the military’s “stop-loss” policy and eventually was stationed in Kandahar during the 2011 surge.

“I’m a government teacher and one of the things we teach our students is the importance of civic duty,” Neuman said. “I saw what some of my students were going through and I decided to sign up. If I’m going to instill these values, then I certainly should practice what I preach.”

Neuman chose to leave the union because he believed his dues were supporting an organization that opposed his principles, particularly on U.S. military involvement in the Middle East. He also said he believes the union protects ineffective teachers, something he found the military never tolerated.

Despite his disagreement with the union on some issues, he enjoys working at the Brighton Public School System.

“The staff here is great,” he said. “I have no problems with unions. If others feel that they work in their best interests, then people should be a part of it. For me it’s a personal choice.”

He added what the lawsuit really came down to.

“Liberty is a simple word to say. I prefer to live it.”

Watch Neuman explain his suit in his own words, via the Macinac Center.

Tweet of the Day: CDC guidelines for reducing Ebola risks among health professionals riddled with errors
Next Post
3-year-old child beaten to death by mother’s boyfriend after she soiled herself