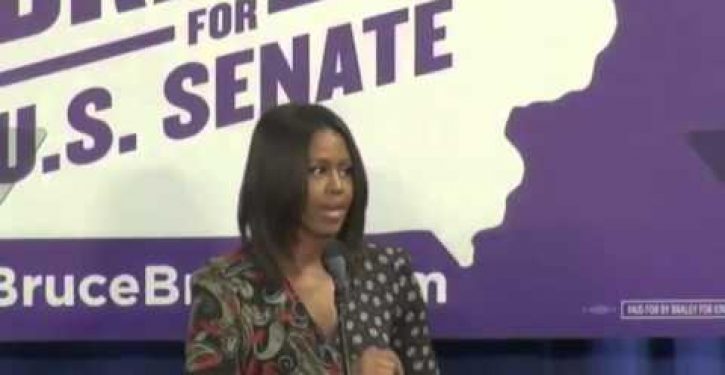 You say “Bailey,” he says “Braley,” let’s call the whole thing off.

The “whole thing” in this case is First Lady Michelle Obama stumping for U.S. Senate hopeful from Iowa, Bruce Braley. Speaking before a crowd yesterday at Drake University in Des Moines, Obama referred to the candidate seven times as “Bailey,” and urged voters to visit the website “VoteBruceBailey.com.” She also said that Braley is a Marine Corps veteran, which he is not.

Here is a video of her catching herself too late.

Braley has been having a rough time of it ever since he insulted Iowa farmers back in March, when he contrasted himself with veteran Sen. Chuck Grassley thus:

If you help me win this race you may have someone with your background, your experience, your voice, someone who’s been literally fighting tort reform for thirty years, in a visible or public way, on the Senate Judiciary Committee. Or, you might have a farmer from Iowa who never went to law school, never practiced law, serving as the next chair of the Senate Judiciary Committee.

The Washington Post summarized Braley’s gaffe as having crossed “a line no Hawkeye State politician should ever cross.”

As for the first lady’s blunder, a number of commentators picked up on it. One of them was CNN’s Dana Bash, who tweeted:

why cant dem headliners get @BruceBraley name right? @FLOTUS — its BRALEY not BAILEY (@billclinton did it too)

Piers Morgan goes from thinking Obama is perfect to asking ‘what the hell’s he doing?’
Next Post
Video: Time running out on buying tix to film exposé of IRS