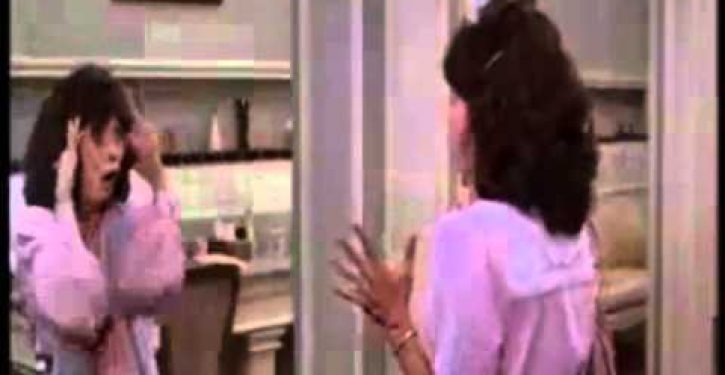 All right, we we’ve had our wild-n-crazy Upset Weekend of Humongitude.  We think Bette Midler and Lily Tomlin expressed it best in their reaction scene in the 1988 flick Big Business (Jim Abrahams, Touchstone/Silver Screen).  The reaction isn’t so much to the games or their outcomes; it’s to the freak-show spectacle of the new polls.  Video below.

We’d love to say enough with all that, but last week, as it so often does, has set up some Games of the Week for this week.  We’ll get to those in due time.  Meanwhile, trundling past the Week 7 early offerings, we note right away some residue from last week.  Freshly unranked BYU will be at Central Florida on Thursday evening, and after the Cougars’ loss last week to Utah State, UCF is giving 2.5.  (Yes, the two teams have played before: once, in 2011.  BYU won.)

The University of Tulsa Golden Hurricane, which beat Notre Dame 28-27 on 30 October 2010, will be at Temple on Saturday for an American Conference showdown.  The two teams met twice in the 1980s, with Tulsa winning both encounters.

Tulsa is now 1-4 after a series of trying weeks, and is losing the confidence of even its most optimistic partisans.  The Owls, on the other hand, are 3-1 and have beaten Vanderbilt and UConn, which at Temple’s level makes for some quality wins.  Owls give 18; the match may be on ESPN-N in your viewing area.

New #11 Oklahoma will be in Dallas for the Big Game: the annual Red River Shootout with Texas.  We take this opportunity every year to point out that ABC, which covers the game, is run by a bunch of lily-livered pansies who might learn a thing or two about swagger and tough talk from My Little Pony.  You will see ABC refer to the game as the “Red River Rivalry,” but this is because ABC, by comparison, makes a little girl in a purple sparkly crown and tutu with a dollar-store plastic scepter look like Lee Marvin, Telly Savalas, and George Kennedy, after they’ve parachuted into France.

In spite of the ignominious loss to TCU last week, the Sooners are giving 15 – Texas being pretty darn unsatisfactory this year.

#16 Oklahoma State hits the turf in Manhattan to take on Kansas, whose 2-3 performance to date fully justifies the 21 points the Okie Pokes are giving.

Navy hosts the FCS’s 1-5 VMI on Saturday, and will be a full-fledged goat, with a capital G, if it can’t beat the Keydets (who ought to be pummeled regularly just for that silly name).  Army hosts Rice, giving 1.  Air Force will be at Utah State, for which bettors have developed a Strange New Respect after the Aggies thumped BYU last week.  No word on whether the Wagon Wheel will have its own shrine set up on Romney Field in Logan.  But the Aggies give 7, in spite of Air Force’s recent run of quality wins.

Virginia Tech has the weekend off, but will be back on Thursday the 16th taking on Pittsburgh.

Nevada will host Colorado State on Saturday, setting up what could be a pretty good game.  The 4-1 Rams look a little more formidable on paper than they actually are; the Wolf Pack is coming off a painful loss to MWC rival Boys Estate in a wild shootout last week.  The oddsquad is wary, awarding CSU the barest 2-point advantage.

LSU has inevitably taken a big rankings dive after the loss to Auburn, dropping out of the Top 25 entirely.  Unfortunately, visiting Gainesville to take on Florida on Saturday isn’t a way to recover any of that earlier standing.  The oddsfellows have the Tigers giving 2, which sounds cheesy and dismissive to us.  Take points.

Sudden #9 TCU has one of the aforementioned Games of the Week, heading to Waco to take on new #5 Baylor.  Much as we love TCU, given the family connection and all, we’d like to see Baylor getting the respect it deserves.  The Bears are giving 8, and we suspect they’ll more than cover.

Wyoming will be in Hawaii for the 22nd battle for the Paniolo Trophy, one of college football’s hippest, if lesser known, rivalries.  Some rivals mutter darkly about their trophies being stolen by third parties, but not the contestants for the Paniolo Trophy.  In 1997, the Warriors just ‘fessed up like men and admitted that they had lost the trophy.  Couldn’t find it.  Had no idea what they did with it.  Prior to renewing the rivalry meetings in 2013, Hawaiian ingenuity came up with a new trophy – which promptly went to Wyoming.  The 1-4 Warriors are giving 5 to the 2-3 Cowboys, possibly due to their home-field advantage.

The sneaking suspicion that #1 Florida State hasn’t had to play anyone yet will not be allayed by Saturday’s match-up with Syracuse in the Loud House.  ‘Noles give 24.

A Game of the Week will erupt at new #3 Mississippi State when new #2 Auburn comes a-callin’ at 2:30 PM CDT on Saturday.  The doings could not be bigger or hairier.  Tigers give 3, and although we think they’re better than that on “any given Saturday,” we also saw the Bulldogs in full snarl last week, and they’re for real.   Should be a good one.

We’ll call Ole Miss #4, although they’re tied with Mississippi State in the Coaches Poll, and note that they have a tough opponent in #14 Texas A&M.   Aggies are no worse than 2-point dogs, and should not be written off.

“#6” Notre Dame hosts North Carolina, giving 17, which is interesting considering that that’s the point spread by which unranked Virginia Tech beat the Tar Heels last week.  Just mentioning.  (The two teams last met in 2008.  UNC is up 18-2 in the series.)

Alabama, having slipped to #7, heads to Arkansas to give 11.  #8 Michigan State will be at Purdue, favored by 22.  Hilarious #10 Arizona will host a likely-looking spoiler in USC, which gives 3, possibly out of pity – or perhaps out of bemusement, considering no one can remember the last time a Top 10-ranked Arizona met an unranked USC, but it was probably before Sandra Bullock wore the famous Wildcats sweatshirt in Speed (1994).

#13 Georgia will be at #23 Missouri for a quality SEC face-off.  Expect good football, if not consequences for the CFB.  Same goes for now-#12 Oregon and #18 UCLA, the latter of which probably won’t be making another assault on the Top 10 this season.

There are a number of games this week that seem like they ought to be accredited rivalries.  But few actually are.   Penn State at Michigan has that nostalgic cachet of yesteryear, for example, but isn’t one of the long-running rivalries with lore, devotes, and bric-a-brac.  Same goes for Illinois at Wisconsin.

We do note that Connecticut and Tulane, now fellow members of the American Conference, meet for the first time on Saturday in New Orleans.

In FCS, McNeese State remains #4 and will be in Huntsville, TX on Saturday to take on Southland rival Sam Houston State.  The Bearkats are 2-3 and coming off a nice win over Lamar, but they’re no match for McNeese if the Cowboys are playing at 100%.  80s and a chance of thunderstorms for the kickoff; watch for the lightning delay.

In Division III, Rose-Hulman has cruised to 4-0 and will host conference rival Bluffton (OH) on Saturday in Terre Haute.  Bluffton, 1-3, has beaten only Heartland punching-bag Hanover so far this season.  The Beavers come off their annual loss to conference powerhouse Franklin – which has lost a step this year, not being voted into the Top 25 as it usually has been.  Rose-Hulman, on the other hand, got 12 votes in the latest Div III Coaches Poll.  Well done, Fightin’ Engineers.  60 and overcast at game time.

Christopher Newport will be in Montgomery, AL to play Huntingdon College on Saturday – as noted by Follies reader-correspondent The Mighty Fahvaag, the farthest the Captains have ever traveled to play football.  The Hawks come in 3-2, like the Captains, and have the home-field advantage – but CNU has the USA South Conference defensive player of the week in linebacker Rahland Gordon.  Hot (90), sunny, and no doubt humid for the 2:00 PM CDT kickoff.

Merchant Marine, now 2-3, hosts Rochester (NY) U. in Kings Point on Saturday.  The 2-3 Yellowjackets, an ECAC conference opponent, will be visiting on USMMA’s homecoming weekend.  50s and rain are likely to make for a soggy field, but we trust the Merchant Marine faithful to know how to have a good homecoming celebration on a chilly, wet day in October.