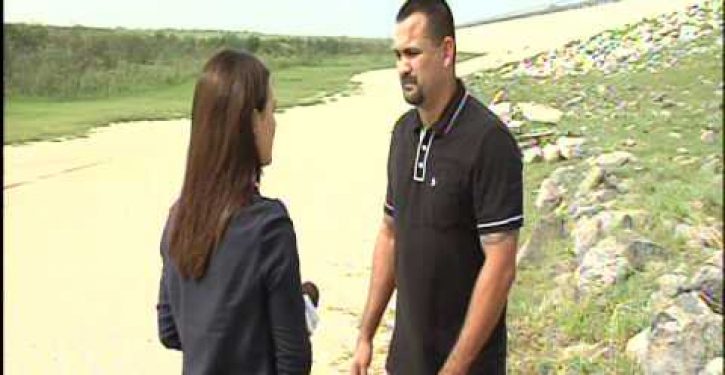 In the wake of the news that “patient zero,” Liberian Thomas Eric Duncan died on Wednesday after being infected with the Ebola virus and bringing it to America, Secretary of State John Kerry doubled down on the federal government’s position that borders are to remain open.

In a particularly ridiculous OpEd at the Washington Post, Kerry mostly focused on publicly shaming countries to spend more money on containing Ebola in West Africa. The Secretary of State also doubled down on the inexplicable position that America’s borders need to remain open.

As an aside, Kerry was quoted at Boston.com on Thursday as saying:

“Life as you know it on Earth ends.”

Back to Ebola. Kerry said, specifically:

“We need airlines to continue to operate in West Africa and we need borders to remain open.”

As reported at Politico, Tom Frieden, director of the Centers for Disease Control and Prevention, said on Friday said “restricting travel between the U.S. and West Africa would likely ‘backfire’ and put Americans more at risk of contracting Ebola.” He said:

“Even if we tried to close the border, it wouldn’t work…People have a right to return. People transiting through could come in. And it would backfire, because by isolating these countries, it’ll make it harder to help them, it will spread more there and we’d be more likely to be exposed here.”

It is evident that the safety of Americans is not the priority. Secretary of State Kerry and CDC head Frieden are in lockstep with the the positions taken by the United Nations and the World Health Organization. United Nations Secretary-General Ban Ki-moon made the SAME non-argument, as reported at Newsweek.

“Many have tried to shut out the virus by closing their borders,” Ban Ki-moon said. “But such an approach only makes the situation worse, isolating countries when they need help most.”

The World Health Organization concurred in a statement:

“Flight cancellations and other travel restrictions continue to isolate affected countries resulting in detrimental economic consequences, and hinder relief and response efforts risking further international spread of the disease; the Committee strongly reiterated that there should be no general ban on international travel or trade, except for the restrictions outlined in the previous recommendations regarding the travel of EVD [Ebola] cases and contacts.”

Seemingly contradicting the notion that Ebola is unlikely to mutate into an airborne illness, while discussing the threat of pandemics in late September, President Obama said,

“We also know that viruses, in large populations, have the opportunity to mutate in ways that can make them even more deadly and spread more rapidly.”

Speaking along with Obama, Secretary of State John Kerry’s comments were quite revealing. Referring to Ebola as “SARS on steroids,” he spoke at length about the economic ramifications of the disease. At one point, Kerry said,

“A disease like extensively drug-resistant tuberculosis can travel as fast as the fastest jetliner, and in an interconnected world, we invest in global health not simply as a matter of charity or as a matter of more responsibility, but we do it as a matter of national security.” [emphasis added]

The federal government has softened a bit on their fear-mongering rhetoric since President Obama announced “Operation United Assistance” on September 16, where Obama lamented that “people are literally dying in the streets” and referred to Ebola as a “threat to global security.”

He said in part,

“Ebola is now an epidemic of the likes that we have not seen before. It’s spiraling out of control. It is getting worse. It’s spreading faster and exponentially. Today, thousands of people in West Africa are infected. That number could rapidly grow to tens of thousands. And if the outbreak is not stopped now, we could be looking at hundreds of thousands of people infected, with profound political and economic and security implications for all of us.”

During that same speech, Obama touted the development of an “air bridge,” which brings supplies and personnel to affected countries.

Despite the fact that the majority of Americans believe that flights from affected countries should be banned until the Ebola virus is contained; the federal government, along with the World Health Organization and the United Nations has stated that such measures would somehow make matters worse, noting that cutting off air travel would hinder Ebola containment efforts. Importantly, there is zero discussion on the “air bridge” during these proclamations.

“We have planes landing every single day bringing in more and more materials. We looked at a number of sites and we selected the best site… and the president approved it.”

If flights are bringing in health care workers and supplies “every single day,” why is commercial travel still necessary?

Additionally, the Clinton Global Initiative has announced their partnership with “AirLink,” a 501(c)(3) organization “that links pre-qualified nonprofits with airlines.”

They, too, are establishing “an air bridge to West Africa.”

Coincidentally, a brand new federal government website launched in February called “GlobalHealth.gov” is a collaboration with the United Nations and the World Health Organization. It seems that America is collaborating quite a bit with these global organizations. The objectives of the Orwellian-sounding “Global Health Security Agenda,” seem very New World Order-y.

For example, some of the vaguely stated goals are to “strengthen international regulatory frameworks governing food safety,” “Launch, strengthen and link global networks for real-time biosurveillance,” and “Develop an interconnected global network of Emergency Operations Centers and multi-sectoral response to biological incidents,” to name a few.

There was no objective related to the deployment of soldiers.

“We know that outbreaks anywhere in the world are only a plane ride away.”

Chris Cabrera with the National Border Patrol Council told local news station ValleyCentral.com that citizens from West African nations have “have entered the US illegally.” In fiscal year 2013, according to Department of Homeland Security statistics, “Border Patrol agents apprehended 112 immigrants from Guinea, 231 from Liberia and 145 immigrants from Sierra Leone, which are the three countries currently experiencing the most cases of Ebola.” Cabrera, concerned for the health of border patrol agents, said

“Our agents are trained, however, they are not medical professionals.”

It is unknown, of course, how many citizens from countries in West Africa were able to successfully cross the porous southern border. As observed by Liberty Unyielding’s Michael Dorstewitz:

“Of course, there’s no real need to sneak across the border. Although Air France, British Airways and Persian Gulf carrier Emirates have suspended flights from West African countries, travel remains unrestricted to the United States.”

As reported at the Brenner Brief, a petition posted on the White House website asking the Federal Aviation Administration (FAA) to “ban all incoming and outgoing flights to ebola-stricken countries until the ebola outbreak is contained” has 18,479 signatories at the time of this writing.