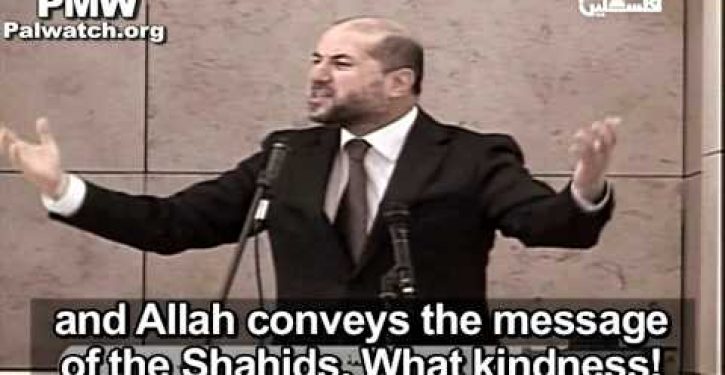 Marwan Al-Qawasmi and Amer Abu Aisheh, two of the Hamas terrorists who kidnapped and brutally murdered three Israeli teens, have been honored as “Shahids,” (martyrs for Islam) by the supposedly moderate Palestinian Authority.

The bodies of Eyal Yifrach, Gilad Shaar, and Naftali Frenkel, were discovered in the city of Hebron in June. Their abductors were killed last month in a gun fight with the Israeli security forces who were attempting to arrest them. Here’s how various “fair-minded” Palestinian news agencies described the shootout:

Israeli occupation forces executed citizens Marwan Al-Qawasmi and Amer Abu Aisheh today, Tuesday, in the early hours of the morning in a military operation in central Hebron… Security sources told WAFA that the occupation forces were still holding on to the bodies of the two Martyrs (Shahids). [WAFA (the official Palestinian Authority news agency), Sept. 23, 2014]

Neither the White House nor the U.S. State Department has commented on the incitement of hatred coming from the “moderate” Palestinian Authority, but they did rebuke Israel this week for allowing Jews to move into homes they purchased from Arabs in the East Jerusalem neighborhood of Silwan.

Number of non-English speakers on the rise In U.S. households
Next Post
Proposed NY legislation would allow authorities to confiscate anyone’s gun