Did you hear the one about the rabbi who goes into a restaurant and is offered the “Jew salad”?

If you’re waiting for the punchline there isn’t one. A Jackson, Miss., rabbi claims that he was actually offered this menu item at a local restaurant from which he was ultimately ejected.

Rabbi Ted Riter of the Beth Israel Congregation said he went to Wraps in Maywood Mart Tuesday for lunch, and he ordered a salad.

Riter said a man he believed to be the owner replied, “A full size or a Jewish size?”

When asked what he meant by that, Riter said the man said, “It’s small. Jews are cheap and small. Everybody knows that.”

Riter said he was incredulous, and that he thought perhaps he might have heard him wrong, so he said, “Did you really just say that?” and the man asked him if he was a Jew. When Riter said yes, he was told to leave the restaurant.

“Expletives, F-bombs, and since I’d never been the recipient of that before, I was in shock, so I didn’t register it until the second or third time he told me to leave,” Riter said. “It was a bit surreal. So I left.”

The owner of the restaurant, John Ellis, agreed to an interview with reporters in which he appears reluctant to comment at times. In it, he says, “I don’t know the rabbi [which he pronounces as ‘reb-eye’], I never met the rabbi, I don’t know who’s a rabbi.”

Riter confirms that he didn’t identify himself as a rabbi:

I didn’t think it was pertinent. I’m the person who’s coming in to buy lunch. It shouldn’t matter if I’m Jewish, if I’m a Rabbi. If we’re going to have a business, I believe we should be open to anyone who wants to come in.

If he had said, ‘Ugh, I’m sorry,’ and laughed it off as, ‘I shouldn’t use that term’ or something of that nature, if he had just intended it as an off-color joke, I wouldn’t have appreciated it but I would have been fine. But to turn around and tell me to get out of his restaurant… I can’t even offer a guess as to what he was thinking.

We need to get past this place of distrust. It really has no reason for still existing in these modern times, and perhaps it never had reason to exist, but particularly now in these times. I was coming in to patronize his business and to be treated with unjustified, unprovoked hatred was really appalling.

Riter posted his version of what went down on Facebook and has received an outpouring of support.

The article notes that Riter has lived in the Jackson area since July, when he became the rabbi at Beth Israel. He said this is the first time anyone has not been completely gracious to him.

So is this altercation simply a question of “he said, the reb-eye said” or is there validity to Riter’s complaint? According to TheBlaze, station WAPT spoke with Ellis who insisted it was all a misunderstanding and that the restaurant does in fact sell a “Jewish salad.” But when the station checked the menu online, it discovered that no “Jewish salad” had been listed as a menu option until after the alleged incident. 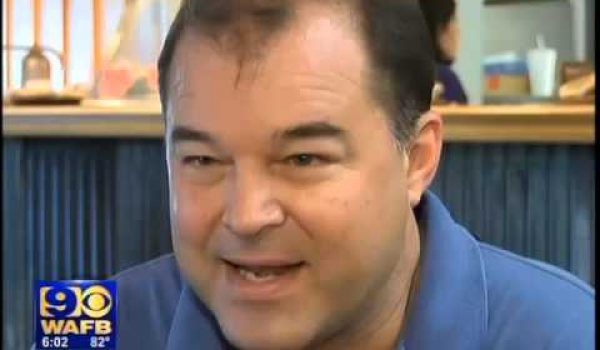