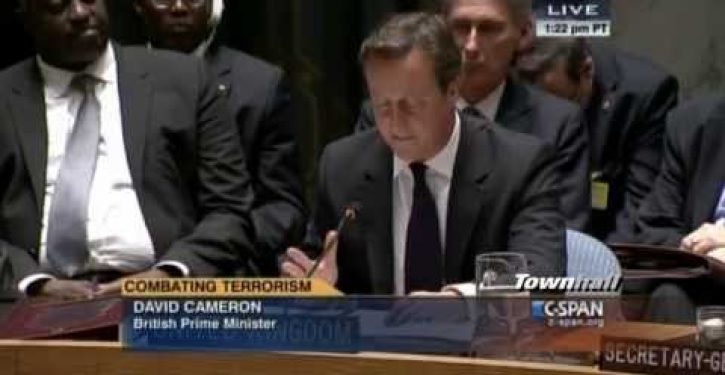 British Prime Minister David Cameron condemned radical Islamic clerics, who he referred to as “Muslim preachers of hate,” as being a catalyst to Islamic terrorism during his address to the United Nations General Assembly Wednesday. Speaking at the same venue, President Barack Obama praised one of those “preachers of hate.”

“To defeat ISIS, and organizations like it, we must first defeat its ideology in all its forms,” Cameron said.

He went on to note that many of those convicted of terrorism had been “initially influenced by preachers who claim not to encourage violence, but whose world view can be used as a justification for it.”

He then listed some of the lies being peddled: “that 9/11 was a Jewish plot or that the 7/7 London attacks were staged; the idea that Muslims are persecuted all over the world as a deliberate act of Western policy; the concept of an inevitable clash of civilizations.”

Watch an excerpt of Cameron’s address below. Story continues after video.

Obama also addressed the U.N., but instead of condemning the “preachers of hate,” he used the occasion to praise one of them–Sheikh bin Bayyah–and referred to him and his organization as promoters of peace.

“Look at the new Forum for Promoting Peace in Muslim Societies — Sheikh bin Bayyah described its purpose: ‘We must declare war on war, so the outcome will be peace upon peace,’” Obama said.

However, The Washington Free Beacon reported:

Bin Bayyah himself has long been engulfed in controversy for many of his views, including the reported backing of a 2004 fatwa that advocated violent resistance against Americans fighting in Iraq.

This is not the first time that the Obama administration has extolled Bin Bayyah, who also has served as the vice president of a Muslim scholars group founded by a radical Muslim Brotherhood leader who has called “for the death of Jews and Americans,” according to Fox News and other reports.

Concern over the administration’s relationship with Bin Bayyah started as early as 2013, when outrage ensued after he was reported to have met with Obama’s National Security Council staff at the White House.

Additionally, the notorious 2004 fatwa permitting armed resistance against U.S. military personnel in Iraq reportedly stated that “resisting occupation troops” is a “duty” for all Muslims, according to reports about the edict.