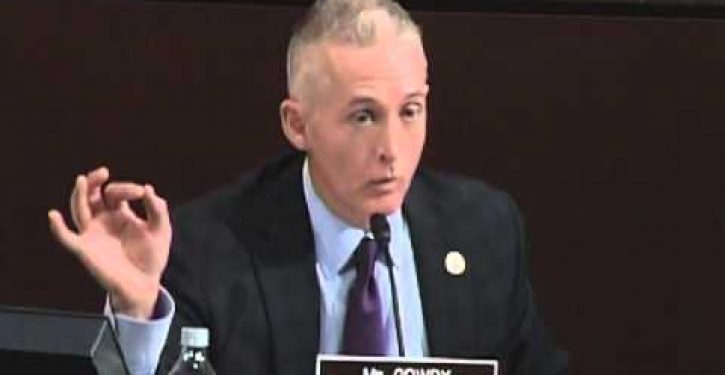 He began by questioning “the efficacy of the [accountability review board] process itself,” where we allow the State Department “to essentially grade its own papers.”

Gowdy noted that only government gets away with this process.

But the second and more important issue is that even assuming the accountability review board process works, “is anyone following the recommendations of the ARB?” Gowdy asked, and then answered his own question.

He read from a document that condemned the State Department for providing inadequate “resources to provide security against terrorist attacks,” while praising “the ambassador for seeking security enhancements long before the attack.”

He then turned to the witness, Gregory Starr, the Assistant Secretary of State for Diplomatic Security, and asked if he knew what document he had read from.

“I believe it’s part of the ARB report,” Starr answered.

“From 1999,” Gowdy said, drawing out each number. “And you can lay it almost perfectly over what happened at Benghazi.”

“’The Secretary of State should personally review the security situation of diplomatic facilities, closing those which are threatened,'” Gowdy said, reading further from the 1999 report.

“Why do you think the 1999 ARB went out of its way to use the word personally?”

“No comment, sir,” he said, after an extended pause..

Watch the exchange via Gowdy.