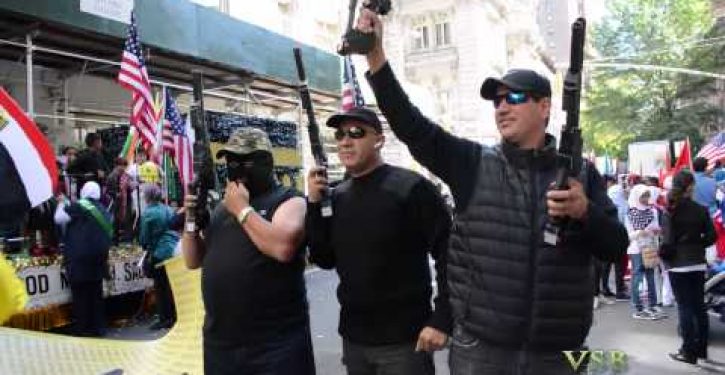 How do you hold a parade with plastic toy guns pointed at bystanders, a woman’s figure in a noose, marchers with rods delivering mock beatings, a pick-up truck festooned with images of violence, and girls swaddled in head scarves riding on another pick-up truck in a cage, behind a (hilariously crude) model of an armored tank – all without triggering gasps of horror and condemnation from politicians and the mainstream media?

You do it while Muslim, of course.

Silly us.  We bloggers thought the Muslim Day parade this year would feature flags of war and conquest, as it has in the last several years.

But we were wrong.  This year’s parade focused instead on overtly celebrating and supporting the Muslim Brotherhood, and depicting the Al-Sisi government in Cairo as a return of the evil pharaohs, complete with slave beatings and a symbolic lynching of Egypt.  (Images courtesy of Pamela Geller, Urban Infidel, and pakayhall of Vigilant Squirrel Brigade.)

Now, I have to admit, the jerry-rigged chariot looks sick and killer, in an Animal House sort of way.  Hollywood should seriously save some stills, because this is how you do homemade props.  For decades, the movie industry has been outfitting school plays as if they were designed by Robert Lepage for the Metropolitan Opera.  Or there were Judy Garland and Mickey Rooney out in Toadsuck, Iowa, squealing, “Hey, let’s put on a show!” – and apparently somebody’s mother had Busby Berkeley’s production designer on speed-dial, because Oscar-quality props by the dozen would materialize from the back of the barn.

The goofy-looking “chariot” in the Muslim parade, by contrast, is a street-cred reality-wagon, the kind of no-commercial-sponsorship prop you can’t pay anyone to come up with.  Hold your tongue and take notes, Tinsel Town.

But I digress.  Let’s see, in no particular order:  the toy guns were confiscated early on by the police.  Apparently the ceremonial slave-beaters who marched around the “chariot” were supposed to be toting the toy guns.  But their guns were seized, so the slave-beaters had to make do with rods.  They did manage nevertheless to choreograph a few Electric Boogaloo moments, judging from the video and photos.

A banner displayed prominently in the parade showed the entire territory of Israel as “Palestine.”  Nothing to see there, of course.  There was the usual display of solidarity with “Palestine,” and apparently a nice selection of T-shirts, Hamas shawls, and “Palestine” flags for sale on tables along the parade route.   The savvy parade organizers may have banned the Hamas and Hezbollah flags and headdresses that showed up in previous years; I didn’t see any in the various videos posted on the web.  (The gun-toters were mostly decked out in black shirts, jeans, and ballcaps.  Nike got a nice plug in one of the viral images.  U-Haul scored big: its URL  is prominent in the image of the caged girls in white hijabs.)

There was a “mosque in Jerusalem” float and a float proclaiming Mohammed as the model for us all.  Pamela Geller has a photo of a hand-out, the size of a business card, with the statement “Allah had no son,” which of course sets the imagination running to the outcry there would be from a certain class of New Yorkers, if Christians held a parade and handed out cards that read “Mohammed was not a prophet of God.”

In an obvious display of racism, the Muslim marchers included a man wearing an Obama Halloween mask.  He appeared alongside men wearing George W. Bush and John McCain masks, so clearly, the implication about him wasn’t positive.

At one point, parade observers caught participants leaving flags in piles – apparently abandoned as trash – on the street, including the American flag.

But the main impression from the parade seems to have been all the yellow, and the ubiquitous “black hand” of the Muslim Brotherhood.  The Muslim Brotherhood theme is this year’s substitute for the shahada flags, which were probably considered too incendiary for 2014 given the brand damage done by ISIS.

A subtler reading – a reading I like the more I think about it – is that the enthusiastic Muslim Brotherhood display has a positive as opposed to a defensive political meaning.  The persistent resentment over Mohammed Morsi’s fate is an indicator that a significant segment of the Muslim Brotherhood remains committed to the Brotherhood’s signature strategy of civilizational jihad.  Morsi’s escapade in Egypt was path-breaking attempt to take the next step in that strategy, and secure a Western-style political win in one of the most important – by far the most populous – of the Arab states: in particular, one that had long been a client of the non-Muslim great powers and pursued a pragmatic, non-apocalyptic policy line.

The distinctive feature of the Muslim Brotherhood strategy is that it conquers “the West” in place, and from within.  It induces a subverted and unwary “West” to fall – lock, stock, and barrel – by its own rules.

ISIS’s methods are crude and disruptive, meanwhile, crashing through borders and driving populations from their homes en masse.  ISIS, by design, doesn’t end up in charge of the same thing it set out to conquer.  By the time it’s in charge, there’s blood and death everywhere.  Everything has been changed.

The tanks, the wildly-waving firearms, the caged women – these images are never far beneath the surface.  But the take-away impression from this year’s Muslim Day parade isn’t the black flag of jihad.  It’s the equally dangerous yellow banner and black hand of the Muslim Brotherhood.