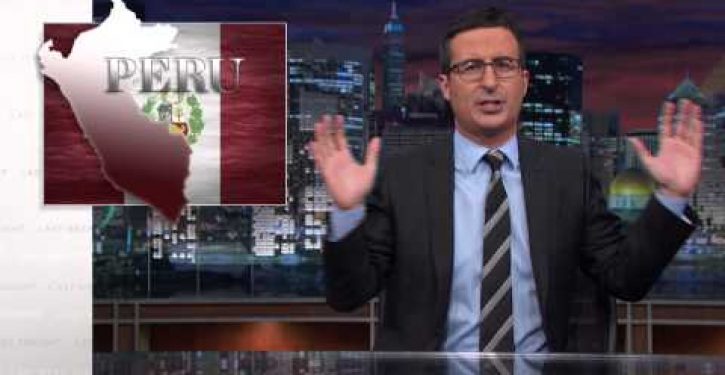 Liberal “comedian” John Oliver remarked Sunday that he was tired of the United States assuming a leadership position on the world stage, and suggested a South American country to lead the charge in the fight against Islamic State terrorists.

He suggested that it’s about time Peru did its part during a segment on HBO’s “Last Week Tonight With John Oliver.”

“Seriously, Peru, seriously,” Oliver said. “ISIS, Peru, poses a threat to the entire globe and you are just sitting there. Life isn’t just a fairytale land of alpacas and pan flutes. At some point you’ve got to pull your weight.”

Watch the clip below via Last Week Tonight with John Oliver. Story continues after video.

Oliver needn’t worry–the United States isn’t taking the lead either, and it hasn’t since January of 2009. “Leading from behind” is little more than a a nice way of saying “I’m following.”

Although President Barack Obama announced Wednesday that “We welcome our responsibility to lead,” America isn’t really leading–we’re offering air support to whatever group on the ground will be doing the actual leading.

Cartoon of the Day: Hawkish
Next Post
Iron Dome: Israel ends the long battlefield reign of the missile