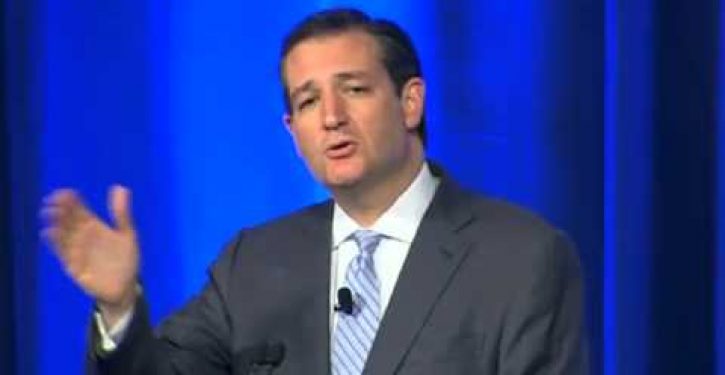 It’s a shame that the viral video from this event has only the last 40 seconds or so of Ted Cruz’s brief time on stage.  The 4-odd minutes leading up to it are essential viewing.  I’ve embedded the full 5-minute video in this post.

As noted earlier by LU, Ted Cruz was booed this week at a conference in Washington, D.C. on defending persecuted Christians, which was sponsored by a newly formed group calling itself In Defense of Christians (IDC).  (See here, here, and here as well.)

A number of media outlets have done Cruz something of a disservice, in my view, by saying that he was “booed off the stage.”  He wasn’t.  He was booed, yes, but you can judge for yourself who decided his time on the stage needed to end, and on what basis the decision was made.  The truth is that Cruz called the audience down for betraying the teaching of Jesus Christ, and told them off in no uncertain terms.

After an introduction in which he pointed out that Christians in the Middle East have no safer haven than Israel, and that those who would support the rights of Christians must also support the rights of Jews, Cruz faced a rising chorus of boos.  The audience was clearly divided: a number of participants were still applauding those same comments.  But the hostility from part of the crowd was palpable.

About three and a half minutes into the speech, a noisy group took exception to Cruz’s statements supporting Israel and affirming solidarity between Christians and Jews in the face of persecution by radicals.

Cruz stopped his speech and confronted them directly.

I will say this: I am saddened to see that some here – not everyone, but some here – are so consumed with hate that you cannot address your brother.

Thank you, and God bless you.

And he walked off the stage.

Prior to the conference, other Christian groups in the U.S. with extensive ties to the Middle East warned that the narrative being promoted by IDC appeared to be “profiting the Iranian and Syrian regimes and Hezbollah.”  According to Dexter Van Zile in the Algemeiner, the Middle East Christian Committee (MECHRIC) issued this warning:

MECHRIC says that instead of promoting the cause of religious freedom, the organization is using Sunni violence against Christians to promote support for Assad in Syria and normalization with the Mullahs in Iran – even if they’re not aware of it.

Coptic Solidarity, the largest international federation of Egyptian Copts, avoided the conference.  (Yet in June, in Washington, D.C., Coptic Solidarity had sponsored its own conference on addressing the persecution of Middle Eastern Christians.)

Of particular interest is the fact that a key backer of the conference is a wealthy Lebanese-Nigerian named Gilbert Chagoury (see the Algemeiner piece), head of a family business empire and long-time intimate of Nigerian strongman Sani Abacha, a brutal thug who ran Nigeria from 1993 to 1998.  Chagoury reportedly amassed a fortune in crony business deals with Abacha, whose financial shenanigans included hiding of hundreds of millions of dollars overseas, money pilfered from Nigerians and streams of foreign aid.

But more than that, according to Lebanese sources cited in a French-language article this month, Chagoury is described as being “close to Hezbollah.”  This means, inevitably, being linked to Iran.  Van Zile notes that, oddly, this allusion was scrubbed after its initial inclusion in the article, by Sandra Noujeim in L’Orient du Jour.

But the Algemeiner piece doesn’t convey quite how detailed the original reference to Chagoury’s link with Hezbollah was.  Here’s my translation (emphasis added):

“Close to Hezbollah, [Chagoury] supervises the businesses held by his supporters in Africa,” say the sources mentioned above. Suspected by U.S. federal agencies of “financing Hezbollah terrorism,” he would have been “arrested [in the U.S.] at an airport four years ago by American authorities for reasons related to business in Nigeria,” according to those sources. “A long-time supporter of General Michel Aoun, the leader of the [Lebanese] Free Patriotic Movement,” [Chagoury was prompted by Lebanese domestic politics related to the oil industry] to turn to MP Suleiman Franjieh, another important Christian in the March 8 movement. His alliance with the Hezbollah-Amal-Marada axis was bound to manifest itself…in an attempt to “prod the Christian nerve in Washington” and sell American policymakers on the theory of an alliance of minorities that would keep Syrian President Bashar al-Assad in power.* That’s when the idea of ​​a conference in Washington emerged.

The final sentence here is significant:

“The Birth of the Islamic State has reoriented the idea of this [IDC] conference exclusively toward the fight against Sunni fundamentalism, but only to justify and strengthen ‘moumanaa’ and the dictatorship it defends,” Washington’s sources emphasize.

“Moumanaa” is a term popularized since 2006 by Hezbollah and Hamas, as the buzzword for a united struggle against Israel and the United States.  The word itself signifies “rejection of Western influence.”  The “dictatorship” referred to in the final sentence is that of Assad in Syria and Hezbollah in southern Lebanon.

In other words, the Lebanese sources who know Gilbert Chagoury’s background and connections believe he is sponsoring a conference intended to justify keeping Assad and Hezbollah in power, by playing on American concerns about the danger posed by Sunni extremists to Christians.

It turns out Chagoury was in fact detained briefly in the U.S. in 2010 when he was prevented by TSA from boarding a flight on a private jet.  He was on the Homeland Security no-fly list.  He has been known as a major donor to Bill Clinton for a number of years, and although it was never explained quite why, he was given a waiver shortly afterward to fly out of the U.S. to France.

Although there are undoubtedly honest pro-Christian advocates in their ranks, at least some in the IDC coalition probably hoped to hold up Ted Cruz’s participation in their conference as a political trophy for Iran and her clients.  But they just couldn’t help themselves, and when Cruz spoke, they made the mistake of booing the wrong things.  The trophy – Cruz’s decisive thumping of the Iran-linked poseurs – went instead to the good guys’ team this time.

* The clause on “Takfirism” omitted from this sentence refers to radical/violent fundamentalism; the reference is to the growth of Sunni terrorist and guerrilla/militant groups in the Muslim world over the last few decades.  The implication is that it was the rise of this “Takfirism” that prompted the Hezbollah axis to push the line with Washington about containing Takfirism with an “alliance of minorities,” including Hezbollah and Christians.  I’ve left it out of the translation because it takes longer to explain it than the five-word clause itself lasts – and without adding anything important to the reader’s understanding.  But if you’re a footnote hound, enjoy this little bonus.