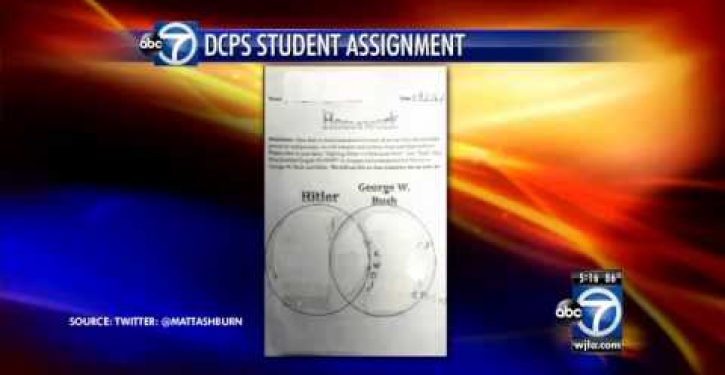 The teacher–unidentified by name or even gender–instructed his Washington, D.C. McKinley Middle School students earlier this week that “both men … abused their powers,” and then invited them to compare and contrast the two using a Venn diagram, according to Washington’s NBC Channel 4.

At least one parent complained after being shown the homework assignment, stating that it was fraught with opinion and showed a complete lack of respect for the office of the presidency.

The D.C. Public Schools sent a letter Thursday to parents apologizing for the teacher’s conduct, and indicating that the students will be informed that the assignment was inappropriate.

“The District of Columbia Public Schools (DCPS) curriculum and guidance documents for teachers do not include what was suggested in this assignment,” the letter reads.

The District of Columbia Public Schools provides teachers with an English-Language Arts curriculum that outlines the topics, texts, and standards to be taught within instructional units, while allowing teachers the flexibility to decide the best approach and day-to-day lessons for their students. One of the units at the beginning of the year is about War and Peace, allowing students to explore different perspectives and determine when conflict is warranted, and when peace should prevail. This week, a DCPS teacher created a worksheet to assign as homework which asked students to compare and contrast President George W. Bush and Adolf Hitler, after reading two texts. No DCPS curriculum materials suggest in any way that teachers should compare the texts in this manner or compare Hitler to any other individual. One text, “Fighting Hitler – A Holocaust Story” is part of the current suggested materials. The text about President Bush is not suggested as part of the current year’s curriculum, but was included last year in a separate unit. The teacher deeply regrets this mistake, and any suggestion to malign the presidency or make any comparison in this egregious way.

The teacher admits to extremely poor judgment and short sightedness and will apologize to students. The school will also send a letter home to families explaining the incident and offering to address any additional questions should they arise.

I can only imagine that the teacher who gave this homework assignment previously taught third grade.

Third-grade students are now being invited to compare Presidents Barack Obama with Abraham Lincoln, “to provide students a deeper understanding of our history and the impact of history on today’s culture,” according to Teachers Pay Teachers.

And this isn’t just some quickie overnight homework assignment–this is a five-day course of study.

In case you haven’t guessed by now, the course description concludes with the statement that “All lessons are common core aligned.”

After being taught, “Mmm, mmm, mmm, Barack Hussein Obama,” we should have seen this coming.

Watch the WJLA ABC-7 news account of the Bush-Hitler homework assignment below.

College: Students must agree ‘why’ they had sex to avoid sexual assault charges
Next Post
Cartoon of the Day: ‘Freedom’s Battle’