Baltimore Ravens running back Ray Rice got what amounted to a slap on the wrist by the National Football League this past March after it was revealed he had been arrested for punching his then-girlfriend in the face. Roger Goodell, the NFL commissioner, “sentenced” Rice to a two-game suspension. The punishment stood even after Goodell upped the ante to six games for any future player excursions into the realm of domestic violence.

Clearly, the suspension was inadequate — something the team was unwilling to acknowledge until today when it did a 180. The final straw was a surveillance video of the assault published by TMZ. (Warning: Extreme violence; viewer discretion advised.)

A short after the release of the video, the New York Post announced:

The Ravens decided to cut ties with Ray Rice … after a video of the running back cold-cocking his then-fiancée in an Atlantic City elevator was published ….

In addition, NFL commissioner Roger Goodell suspended Rice from the league indefinitely and stated Rice would have to apply for reinstatement. Goodell initially gave Rice a two-game suspension that was met with widespread outrage for being too lenient.

In horrifying video of the February incident, Rice can be seen lunging at his fiancée several times as he tries to intimidate her outside the elevator at the Revel. She angrily gives him a backhand slap before they make their way toward the open doors.

Once they get on, Janay Palmer — who is now Rice’s wife — keeps her head down and appears not to say a word, but the New Rochelle native’s intimidation tactics continue. The elevator doors don’t even close before Rice jumps in his future wife’s face two more times and follows up with a quick swipe with his left hand, which doesn’t appear to fully connect. When Palmer appears to stand up to him, Rice throws a pulverizing left hook. Palmer’s head hits the elevator hand rail — knocking her out cold. 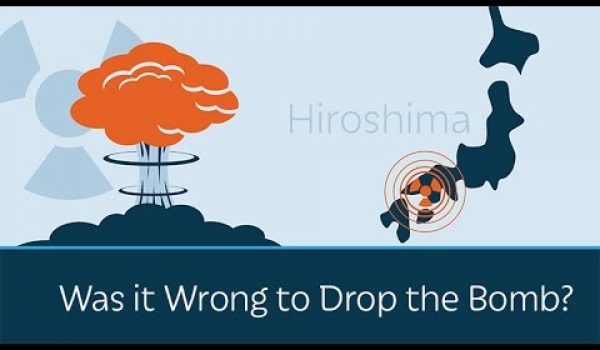 Prager U: Was it wrong to drop the atom bomb on Japan?
Next Post
Over 100 teens rampage in Memphis shopping center, ‘knocking out’ shoppers (Video)