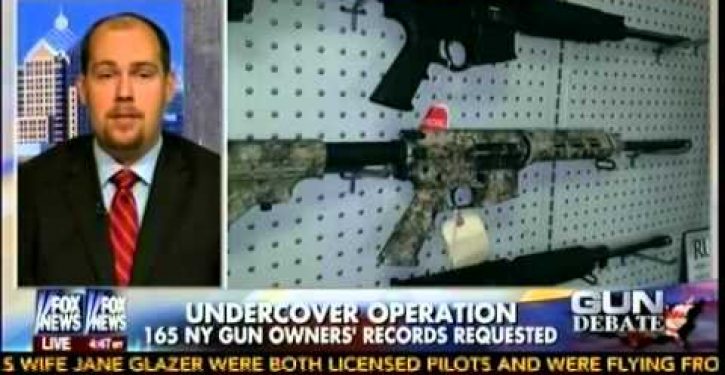 An Albion, N.Y. gun shop owner was told Wednesday by the police that he had 24 hours to turn over his list of 165 customer records or risk having his store subjected to a SWAT raid. He gave up the records, hired a lawyer and appeared on Fox & Friends Saturday.

At the heart of the dispute was shop owner Joseph Palumbo’s sale of AR-15-style rifles, specially modified to comply with New York’s hastily-drafted SAFE Act. The law prohibits, among other things, the sale of rifles with readily-detachable magazines.

“We had been told by the state police that this modification was legal over a year ago,” Palumbo told Fox News co-host and The Daily Caller Editor-in-Chief Tucker Carlson.

He added that although the police lacked a court order, they nonetheless threatened to confiscate inventory if he didn’t comply. His family attorney advised him to hand over the records, then seek the advice of a Second Amendment specialist.

“If I were one of your customers, I’ve gotta be honest, Joseph,” Carlson said. “I’d be very upset you gave my name over to the cops.”

Palumbo confirmed that every one of his customers purchased what they thought was a firearm that was modified to comply with the law, and that they were subjected to a Federal background check at the time of purchase.

“So the FBI had cleared them, but that wasn’t enough for the state of New York,” Carlson said. “That’s unbelievable.”

Watch the interview below.