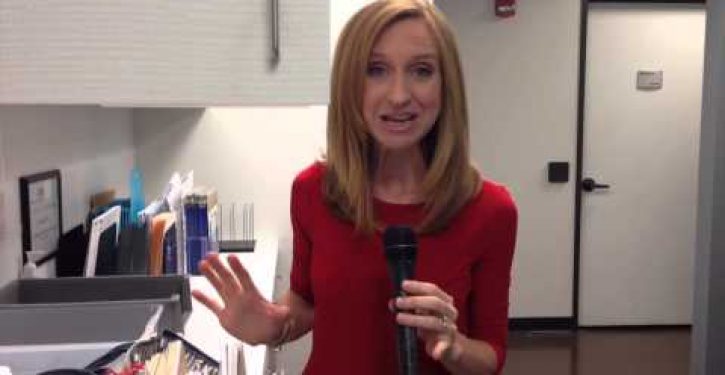 A few years ago, I had the opportunity, through friends, to attend an event hosted by the Friends of Abe.  Which doesn’t exist, so forget what I just said.

In any case, at this event there were speakers and audience applause, as there so often are.  Early on, one of the speakers delivered a very good line, and the audience responded with a standing ovation.  I had to laugh inwardly, because these entertainment- and performance-industry people were actually really good at applause.  It was an art and a discipline, reflexively but noticeably done with theatrical flair.

Who knew you could be good at applause?  They made the rest of mankind look like ragged, unpolished bumpkins.  I’ll never look at a standing O or an applause interlude the same way again.

Now comes a behind-the-camera reporter documenting her firing from CNN with a video.  If you know how to make a professional video spot about losing your job, it must be newsworthy, right?

That’s what all those coal miners and light-bulb makers lack.  All those construction workers and truck drivers, warehouse managers and accounting clerks whose services are no longer needed – what none of them has is a production team and a professional cameraman.  It just doesn’t matter quite as much that the job-killing government policies of decades have caught up with us, when it’s all those miscellaneous flyover rubes out there losing their jobs.

Through the magic of journalism and information technology, however, you can watch a CNN reporter lose hers, and recognize it for the moment of eventhood it is.

Are illegal immigrants enrolling in public schools actually adults?
Next Post
Cartoon of the Day: Terrorists hear from Obama’s America