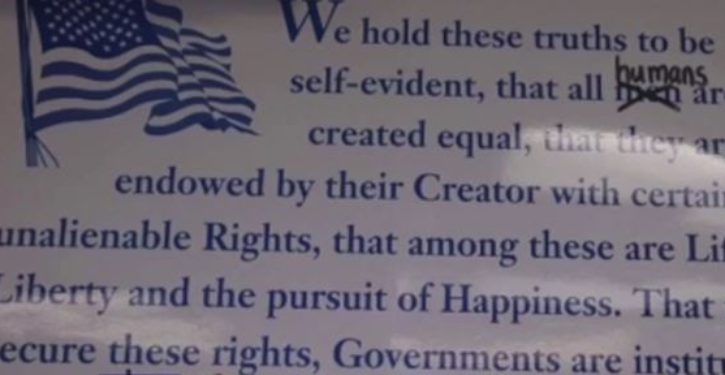 By rejecting the time honored “peace through strength” foreign policy, President Barack Obama has corrupted America’s identity as the world’s moral compass and peacemaker. In so doing, he has betrayed a trust that will take decades to restore.

When Katie Couric was still with CBS News, she lectured then-Secretary of State Condoleezza Rice with a child’s question: “To quote my daughter, ‘Who made us the boss of them?’” she asked, according to Media Research Center.

Couric’s question failed to distinguish a global leader from a world tyrant. The United States began assuming its role as the former after its entry in the first World War; we’ve never been the latter. We’ve been the world’s peacemaker — not its “boss.”

The world has never been a perfect place. Although we saw occasional outbreaks of violence and war during the Reagan years, acts of cruelty were generally contained, and war usually amounted to isolated skirmishes.

Compare that to today. President Barack Obama’s back-seat, disengaged “leading from behind” notion of a foreign policy created a huge vacuum in the world — one that was filled by the basest, most barbaric elements of society.

Male children are buried alive or beheaded. Young girls and women are brutally raped and kept as sexual slaves. Men are beheaded or shot, then their bodies crucified, all because they practice the “wrong” faith, or the wrong sect of the right faith. And that’s just ISIS.

Russia and China — our major foes during the Cold War — are now rattling their sabers and testing our resolve. They find it non-existent.

Notwithstanding Obama’s blustering and oft-ridiculed “red line” speech with respect to Syria’s use of chemical weapons, he dismissed the idea that U.S. involvement in that country’s civil war would have changed a thing. So he opted to do nothing.

Obama told Jeffrey Goldberg in a February interview, published in the Bloomberg View:

When you have a professional army … fighting against a farmer, a carpenter, an engineer who started out as protesters and suddenly now see themselves in the midst of a civil conflict—the notion that we could have, in a clean way that didn’t commit U.S. military forces, changed the equation on the ground there was never true.

His former secretary of state threw her old boss under the bus on that one. Hillary Clinton adamantly disagreed with the president in an interview published earlier this month.

According to The Atlantic, Clinton told the same interviewer:

The failure to help build up a credible fighting force of the people who were the originators of the protests against Assad—there were Islamists, there were secularists, there was everything in the middle—the failure to do that left a big vacuum, which the jihadists have now filled.

They’re both wrong. The problem didn’t just start in Syria — it began early in the president’s first term with his complete withdrawal of U.S. troops from Iraq without insisting upon a status of forces agreement. Our withdrawal began in June 2009 and was completed by December 2011, a time when Clinton was still secretary of state.

And by that single act, Obama and Clinton disregarded who we are and what we represent to the world as a nation.

America wasn’t founded so much through conquest as it was by an idea. “Europe was created by history,” is the way the late British Prime Minister Margaret Thatcher put it. “America was created by philosophy.”

And a large part of that philosophy was voiced by John Adams — that America is “a government of laws and not of men.” A government of laws, by extension, is one that lives by its promises rather than the whims of its leaders.

There was one time in recent history when America didn’t keep its promise — the aftermath of the Vietnam War — and the result was tragic.

A heavy bombing campaign directed against Hanoi prompted the North Vietnamese to finally come to the bargaining table. The result was the Paris Peace Accords, signed in 1973 and calling for a cessation of hostilities between North and South Vietnam.

A provision was included that in the event the Communist North Vietnamese were to invade their southern neighbor, the United States would come to its aid by replacing all armament expended in South Vietnam’s defense — gun for gun, bullet for bullet, helicopter for helicopter.

South Vietnam was invaded two years later, but the new Democratically-controlled Congress refused to honor our commitment. South Vietnam fell and its president was forced to resign, but not before he excoriated the United States’ refusal to honor its committments.

“At the time of the peace agreement the United States agreed to replace equipment on a one-by-one basis,” President Nguyen Van Thieu said in a radio and TV address, according to the BBC. “But the United States did not keep its word. Is an American’s word reliable these days?” he asked.

He continued with a reminder of what we, as a country, gave in that conflict.

In short, we won the war, only to lose the peace two years later, according to video commentator Bill Whittle on TruthRevolt. More recently, we did much the same in Iraq, to the exact same result. After winning the war, we lost the peace. When the inevitable violence and slaughter followed, we did nothing.

Unlike Vietnam, there was no agreement, either expressed or implied, to provide military aid to Iraq if the need arose. But a strong argument can be made that we had a moral obligation to do so.

By invading Iraq, we disrupted that country’s people, its government and its ability to defend itself. America owed Iraq a moral obligation to continue to defend it until it was once again strong and vibrant enough to do so on its own. And we owed the same obligation to the men and women who gave their lives to free the Iraqi people.

After the Second World War, we established and maintained forces in Europe and Japan. We did the same in South Korea at the close of the Korean War — not as a symbol of conquest, but rather a mechanism for peace. “Leading from behind” can never replace “Peace through strength.”

We are the world’s peacemaker, not its conqueror. Either Obama doesn’t understand this, or he chooses to ignore it. Whatever the case, the world is a much more dangerous place because of it.

Obamacare could be hazardous to your tax refund’s health
Next Post
Liberal warns that U.S. faces a danger in calling ISIS ‘evil’