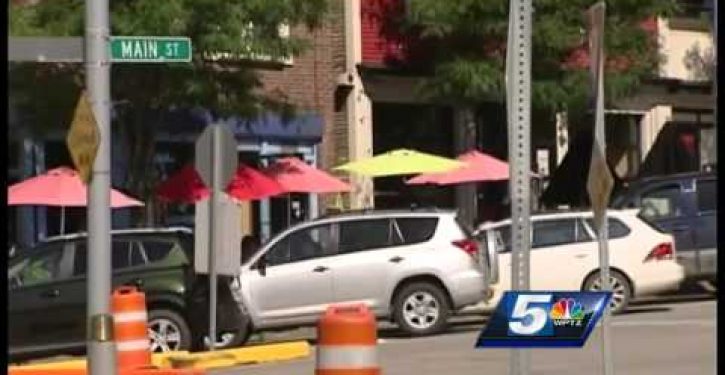 A Muslim woman was offended by the sign a Winooski, Vt. restaurant erected, which proclaimed, “Yield For Sneakers Bacon.” Following the complaint, Sneakers Bistro, a breakfast and lunch eatery, removed the sign citing, among other reasons, “safety concerns.”

The sign was erected on public property as a part of a city campaign called “Operation Bloom.” Any business that helps the city maintain its flowerbeds is entitled to post an advertising sign in the area it maintains, according to NBC affiliate WPTZ Channel 5 News.

The Sneakers sign soon resulted in a debate over “diversity” on the city’s online discussion page, the Winooski Front Porch Forum.

It started with a post from one woman who wrote that the sign was insensitive to those who do not consume pork. She said as a Muslim she is personally offended by it.

The owners of Sneakers spoke to WPTZ. They say they’ve reached out to the individual who made the post and proactively took the sign down. They also say they regret any harm caused by the sign, and that their goal was never to cause stress or bad feelings.

We are here to serve people BREAKFAST, not politics. We removed the sign that was located on public property as… http://t.co/RX8psKBITL

This in turn led the reader to Sneakers’ Facebook page, where this message was posted:

“We are here to serve people BREAKFAST, not politics. We removed the sign that was located on public property as a gesture of respect for our diverse community. There were also concerns raised about safety [emphasis added]. Removing it was not a difficult decision. We still love bacon. We still love eggs. Please have the political conversation elsewhere.”

That message has since been removed.

Not everyone was thrilled with the restaurant’s decision. Here are a few complaints other users tweeted:

@Sneakers_Bistro Christians should boycott your restaurant on grounds of capitulating to bullies. Word “bacon” is offensive to NOBODY!

.@Sneakers_Bistro You caved, plain and simple. Over BACON. UNREAL Hope you don’t have #Redskin potatoes on your menu #PCPolice #ILoveBacon

The brouhaha began over diversity. Isn’t that what diversity is all about? You respect my ham and bacon; I’ll respect your falafel and hummus.

Watch the news clip below, via WPTZ NewsChannel-5: