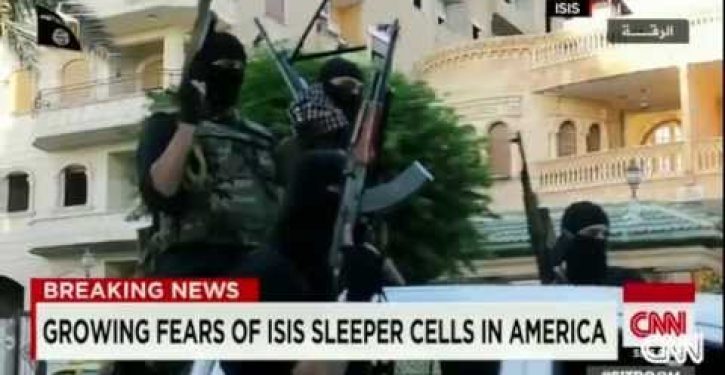 The FBI and Department of Homeland Security sent a joint bulletin to local law enforcement agencies Friday with a chilling message: Be on the lookout for ISIS sleeper cells.

Although the message contained no specific known threat, it nonetheless asks U.S. law enforcement to be vigilant in light of recent events, according to CBS News.

Those events include the beheading of American photojournalist James Foley this week, allegedly in revenge for U.S. strikes against Islamic terrorists in Iraq, as well as ISIS’s promise to murder more American citizens if strikes continue.

“They’ve not only collected ransom from European countries for hostages but they’ve sacked several banks that have given them hundreds of millions of dollars,” WBZ-TV security analyst Ed Davis said.

“When you see an organization that’s this well grounded in tactics also having the ability financially to move those plans forward it’s a very troubling time,” he added.

Retired Army Ranger Maj. Bob Kinder, an Iraq and Afghanistan veteran and counter-terrorism expert, told MyFoxBoston Friday of additional factors putting us at risk, most notably that we “can’t secure the southern border.”

He also reminded viewers that “there are at least a hundred Americans that we know of that have gone to fight in Syria.”

Those are the known ones. “What we’re concerned about are the ones we haven’t identified,” who, after having been radicalized are free to return using their U.S. passports.

“I have been told with no uncertainty there are ISIS sleeper cells in this country,” he said.

Although U.S. officials refute that claim, there are indications to support it, according to Newsmax, which reported:

In several telephone conversations with a Reuters reporter over the past few months, Islamic State fighters suggest their leader, Iraqi Abu Bakr al-Baghdadi, is planning something for the West – and that attacks could take place through sleeper cells in both Europe and the United States.

“The West are idiots and fools,” one fighter told Reuters. “They think we are waiting for them to give us visas to go and attack them or that we will attack with our beards or even Islamic outfits.

“They think they can distinguish us these days – they are fools and more than that they don’t know we can play their game in intelligence. They infiltrated us with those who pretend to be Muslims and we have also penetrated them with those who look like them.”

“Clearly ISIS, if you’re interested in that ideology, that’s the most exciting thing to go and join right now,” CNN analyst Peter Bergen told CNN of the approximate 100 known Americans who have joined the terror organization.

Haras Rafiq of the Quilliam Foundation referred to ISIS leader Abu Bakr al-Baghdadi as “a narcissistic psychopath” in a CNN interview.

“He wants to be bigger than Osama bin Laden, and one of the ways he will measure that is how effective and how big the terrorist activities he can carry out in the West are compared to what bin Laden was able to do,” he said.

Watch the CNN report below.