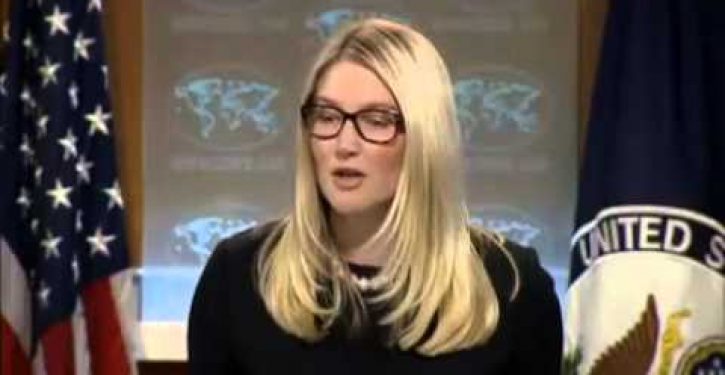 Following the release of a video depicting the beheading of American journalist James Foley by ISIS terrorists, Israeli Prime Minister Benjamin Netanyahu compared that group to Hamas, in that they’re both “enemies of all civilized countries.” The Obama State Department refused to support that premise.

Instead, State Department spokesperson Marie Harf chose to argue that ISIS and Hamas are technically separate groups having separate leaders.

It began when a reporter noted during Wednesday’s press briefing that “Prime Minister Netanyahu…said that Hamas and ISIL were one and the same.” He asked Harf, “Do you agree with that premise?”

“I think by definition they are two different groups,” she said. “They have different leadership, and I’m not going to compare them in that way… I’ll let him [Prime Minister Netanyahu] speak for himself, but I’m not going to use that comparison.”

She did, however give him this much:

They’re both foreign terrorist organizations designated under United States law, but I’m not going to do any more comparison of them. Obviously, they’re quite different in some ways.

Well of course they’re “two different groups” with “different leadership.” But that’s not the point the Israeli prime minister’s comparison. Here’s a transcript of his remarks.

As for the Foley beheading itself, it “shows you the barbarism, the savagery of these people,” Netanyahu said. “We face the same savagery. People who wantonly rocket our cities and conduct mass killings, and when they can, they murder children, teenagers, shoot them in the head, throw people from the sixth floor, their own people, and use their people as human shields.