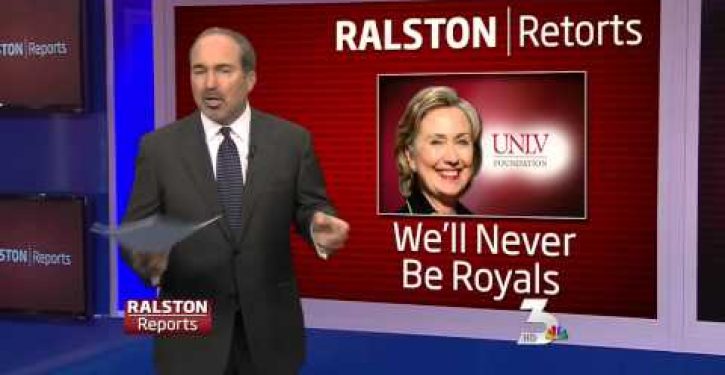 A reporter for a local Las Vegas TV station took dead aim at former Secretary of State Hillary Clinton’s speaking demands and scored a bull’s eye, asking, “Who gets to hold her crown while she speaks?”

Las Vegas affiliate KSNV’s Jon Ralston blasted Clinton during Monday’s “Ralston Reports,” and claimed that she herself should be “embarrassed” over the demands she made for a “royal treatment” when she speaks at University of Nevada-Las Vegas in October.

One of her contract demands calls for “a $39 million, 16-passenger Gulfstream G450” to cart her and her entourage to Las Vegas and back, according to the Las Vegas Review-Journal, as reported by Liberty Unyielding previously.

Under the apparent delusion that she has the 2016 presidential race in the bag, the paper also noted that “She insists on staying in the ‘presidential suite’ of luxury hotels that she chooses anywhere in the world, including Las Vegas.”

The price of Hillary Clinton’s scheduled speech and UNLV fundraiser could be going up. Las Vegas Review Journal, which obtained Clinton’s contract with the UNLV Foundation, reports in addition to her speaking fee of $225,000, Clinton is demanding a private jet, a presidential suite and adjoining rooms for her entourage, and Clinton refuses to mingle with the common folk. She wants to approve any media types attending the event.

And now, a word about royalty. We don’t have kings and queens in America, or at least we shouldn’t. But when I see the red carpet UNLV is rolling out for Hillary Clinton in two months I start to wonder. Unless you’re a mindless partisan, the details of that contract with the UNLV Foundation should disturb you. They were uncovered, as I said by the RJ’s Lara Myers, and published over the weekend. The contract reads as if Hillary is being given the, yes,  royal treatment. Now it is bad enough that the UNLV Foundation folks agreed to that outrageous $225,000 fee as students struggle to make ends meet.

But the contract they signed shows they were willing to agree to terms no self-respecting institution would. She wants a private jet, a presidential suite, rooms for staff, and, get this, all cell phone charges for everyone paid for. Oh, and if the $225,000 is not enough UNLV has to spring for a stenographer, and no one gets to see the transcription except — Hillary. No media coverage at all, no statements, keep the rabble out of the room. The contract also says Hillary is not — and this is in all caps — endorsing the sponsor. That is, she does not want anyone to think that she actually likes UNLV. No one can take a picture of Hillary and post it to Facebook or tweet it unless, of course, you get her agent’s permission.

I gather UNLV held firm on a provision that no one was allowed to look her directly in the eye and that men were supposed to bow and women curtsy before her. I don’t know who should be more embarrassed, Hillary or UNLV? I only have one question: Who gets to hold her crown while she speaks?