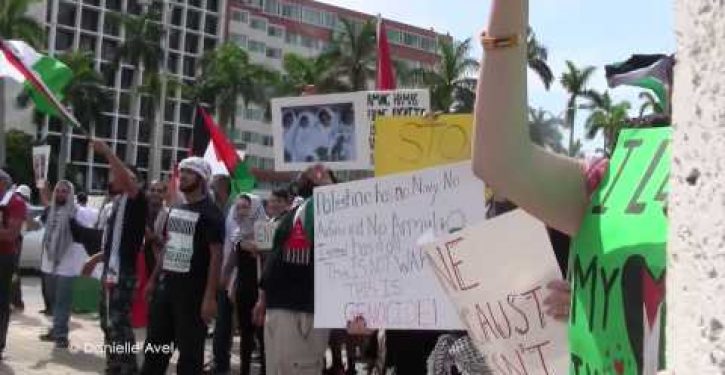 The world has become a scary place lately. But not so much because of the stepped-up terrorist activity by groups such as Boko Haram, the Islamic State and Hamas, but rather the Western world’s acceptance and sometimes even approval of it.

A Garwood, N.J. resident displayed a flag associated with the Islamic State of Syria and the Levant, together with a Turkish flag, resulting in fear and outrage among its residents, according to the Washington Free Beacon.

The Free Beacon contacted the Garwood Police Department. Chief of Police Bruce Underhill advised Wednesday afternoon in an email that they were “aware of the situation” and home’s residents agreed to “voluntarily” remove the flag.

“Thank you for your concern regarding this important matter,” Underhill wrote the Free Beacon in the email. “Only with the public’s continued cooperation can we keep our communities safe.”

“Please be assured that the Garwood Police are aware of the situation and have taken the appropriate steps,” Underhill wrote. “At this time, the flag in question has been voluntarily taken down. No further comments.”

The terrorist flag was removed, leaving only the Turkish flag still in place. In an update, the Free Beacon wrote:

Following publication of the story, Garwood Police Chief Bruce D. Underhill denied that the police “ordered” the flag to be removed and would not discuss whether or not the police had been contacted about the home in question. He also declined to discuss what “appropriate steps” were taken after his officers became aware of the situation. The headline and the story have been updated to reflect Underhill’s further comments.

New Jersey resident and former Israeli paratrooper Marc Leibowitz tweeted a photo of the home with the flags:

Leibowitz was retweeted almost 600 times and received scores of replies. Here are a few:

It’s beyond creepy–it’s downright disturbing, especially in the United States. Yet we’re seeing more of it it every day.

A rally affiliated with the Council on American-Islamic Relations was held in downtown Miami close to the Israeli consulate on July 20. One of the phrases that protestors chanted was “From the river to the sea, Palestine will be free.” Translation: Israel will be eliminated and replaced by Palestine, according to The Algemeiner.

Other chants heard were “We are Hamas!” a group recognized by the United States as a terrorist organization, and “We are jihad!”

CAIR referred to this as a peace demonstration.

Watch a video clip of the protest here.