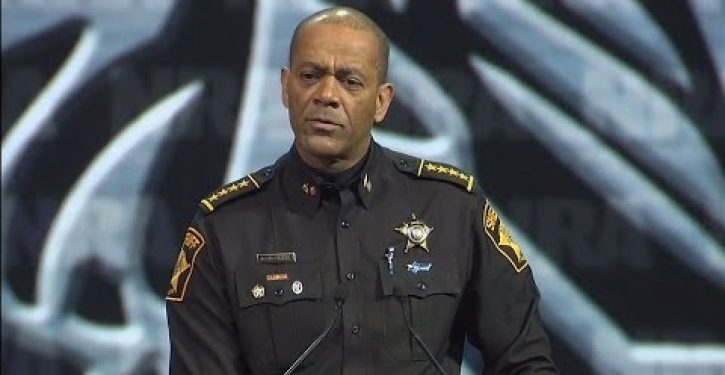 Bloomberg’s PAC was created “to support candidates and referenda in local, state and Federal races across the country, with a focus on issues including gun laws, education policy and marriage equality,” according to the group’s website.

Emphasis in Clarke’s case is on “gun laws.” The sheriff has been a strong and vocal proponent of the Second Amendment, and has expressed his views on national TV and at pro-gun events.

“I trust the voters,” he said in a statement to the paper. “The voters can’t be bought.”

The ad buys by Bloomberg’s PAC come on top of $400,000 in media ads purchased by the Greater Wisconsin Committee to try to beat Clarke, who is seeking his fourth term in Tuesday’s Democratic primary election.

Clarke’s pro-gun views have caught the attention of the National Rifle Association, which invited him to appear at its last national convention. The NRA also sent out an appeal to its members asking that they contribute to Clarke’s campaign.

“Make no mistake: Sheriff Clarke is fighting the re-election battle of his life right now because he dared to stand on principle by standing up for you, me and the NRA,” wrote Chris Cox, executive director of the NRA’s Institute for Legislative Action.

Bloomberg, despite his willingness to contribute huge funds, has had his own problems with success on Second Amendment issues. According to Guns Save Lives:

Bloomberg’s previous attempts to get make guns an issue at the local level have failed miserably. Many credit Bloomberg’s involvement in the recall elections of two anti-gun Colorado state lawmakers as one of the main reasons the pair lost.

Even anti-gun Colorado Governor John Hickenlooper has asked Bloomberg to stay out of Colorado politics for fear that he will do more harm than good.

Here’s a clip of Clarke’s remarks at the 2014 NRA convention held in Indianapolis.