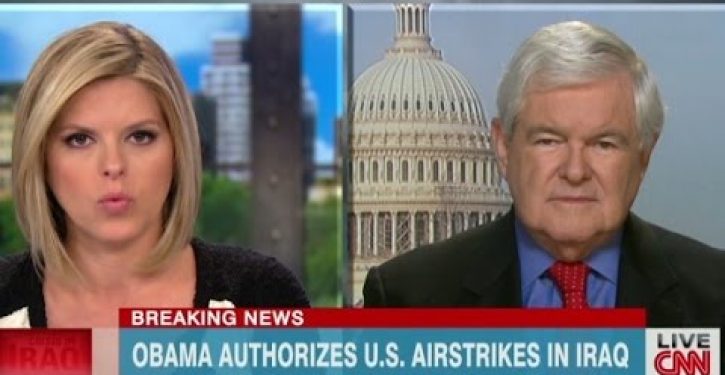 Former U.S. House Speaker Newt Gingrich expressed outrage on CNN Friday over the Obama administration’s tepid response to the genocidal assault by ISIS in Iraq. He insisted the United States must do more than merely stop ISIS–it should hunt the terrorist organization down and destroy it.

He told New Day co-anchor Kate Bolduan that the problem with radical Islam is nothing new — it’s been brewing since Iran invaded the U.S. embassy in Tehran during the Carter administration, and “we have not had the courage to confront how bad this is.”

He also emphasized that ISIS isn’t merely a local organization — its tentacles spread throughout the world, actively fighting in Iraq, Lebanon and Syria, and recruiting members in Europe and the United States.

Bolduan asked what can be done.

But our goal shouldn’t be to stop ISIS. Our goal should be to destroy ISIS. This is a radical anti-human organization.

Bolduan wondered whether the same goals might be met by escalating air strikes in the region.

Gingrich stressed that complete annihilation should be the objective when dealing with all radical Islamist groups.

“ISIS is a radical Islamist organization dedicated to wiping out everybody who’s not prepared to convert to Islam,” he said, and likened it to Hamas in Gaza and Boko Haram in Nigeria.

Watch the interview via CNN.