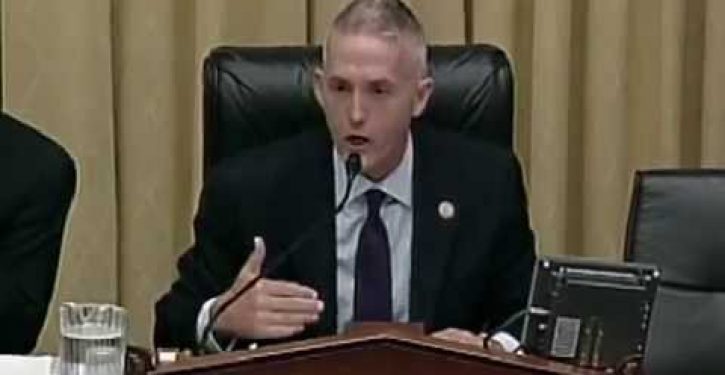 The grilling by U.S. Rep. Trey Gowdy, R-S.C., directed at a witness brought in by Democratic House committee members Wednesday no doubt left the witness wishing he hadn’t bothered to appear.

Gowdy questioned University of Baltimore law professor Charles Tiefer at a House Judiciary Committee hearing on a single issue: whether the need exists for a special prosecutor to investigate the Internal Revenue Service’s targeting of conservative organizations scandal.

“Professor Tiefer, would you seat a juror who referred to your client as an obscene body part?” he asked.

The professor, called by the opposition party as an expert witness on the issue of special prosecutors and conflict of interest was already clearly confused.

“I’m sorry?” he said, after a lengthy pause.

“I really have trouble to giving you an answer except that—“

They’d just gotten started, and things were already not going well for the professor. The congressman interrupted at this point.

“Well, then you would starve to death as a lawyer if you can’t answer that question, professor,” Gowdy asserted. “You would seriously consider seating a juror in a trial, a criminal trial, where your client was accused of a crime, if that juror had referred to your client as an obscene body part, you would struggle with whether or not to strike that juror?”

When Gowdy turned the example around and asked whether, if serving as a prosecutor in a criminal case, whether he would seat a juror who had called police “terrorists,” Tiefer said he didn’t see a connection.

“I’ll give you the connection!” Gowdy shot back. “Lois Lerner just referred to conservatives as an obscene body part and she said we were ‘crazies’ and likened us to terrorists!”

Gowdy then worked through the Department of Justice’s conflict of interest in investigating the the IRS scandal after the president had already weighed in on the matter, and judged there wasn’t “even a smidgen” of corruption.

Watch the exchange in the clip, provided by Gowdy’s office.

German Jews warned: Hide your Jewishness, ‘the risk of being target of an attack great’
Next Post
Hamas’s child labor fatalities