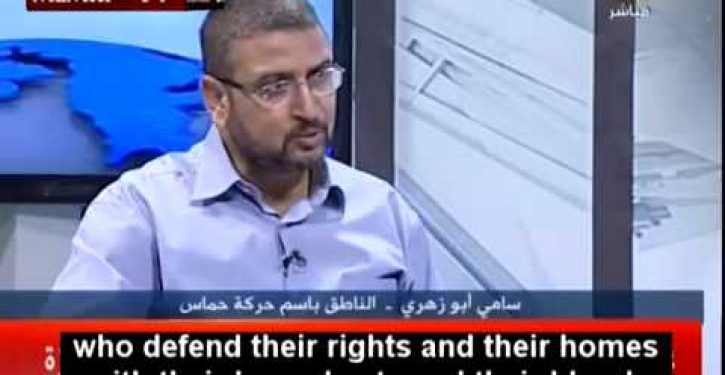 Israeli Prime Minister Benjamin Netanyahu confirmed to Secretary of State John F. Kerry that a cease-fire was broken by Hamas after “militants fired rockets into Israel,” as reported at the Washington Post.

While Kerry works with Hamas apologists Turkey and Qatar over a cease-fire deal, while Hillary Clinton excuses the militants for firing rockets from heavily populated areas, while Nancy Pelosi insists that Qataris told her repeatedly that Hamas is a “humanitarian organization,” the radical Islamists get away with murder, literally. Nancy Pelosi also said that it is “a shame” about the “rumor” that Hamas uses “children and families as shields.”

Yes, it is a damn shame. And it is not a “rumor,” as Hamas Spokesman Sami Abu Zuhri admitted the practice, as translated by Memri:

Pathetically, John Kerry “condemned the killing of the two soldiers and the abduction of the officer as ‘an outrageous violation of the cease-fire negotiated over the past several days, and of the assurances given to the United States and the United Nations.'” The definition of insanity certainly applies in the world’s response to the Israel / Gaza conflict.

Hamas has no intentions of giving up it’s goal of destroying Israel. As observed at the Washington Free Beacon today, the pattern does not change:

Yesterday, a video posted at Defense.gov confirmed that Defense Secretary Chuck Hagel called for “the disarmament of Hamas and all terrorist groups.” He did not get into who would be carrying out the “disarmament.”

In the meantime, Ayatollah Seyed Ali Khamenei, Iran’s Supreme Leader, has been calling on “[T]hose who love Palestine” to arm the West Bank, as reported at Liberty Unyielding. One can only take a cursory glance at this map to determine that arming militants in the West Bank would be disastrous for Israel.

As reported at the Times of Israel, Khamenei’s words have inspired Iran to push high-ranking Iranian officials to make the case with Muslim leaders to arm the West Bank. Iranian researcher Amir Mousavi said that “‘a major reshuffle awaits the region’ as ‘new and significant fronts will be opened all of a sudden, to support the Palestinian cause in the West Bank and Gaza.'”

“The Islamic governments and supporters of the Palestinian people should do their utmost to arm the West Bank, and should arm not only the West Bank but also the areas occupied in 1948.”

Not to be outdone, Major-General Qassem Soleimani “released a statement Wednesday calling for the continued militarisation of the Palestinian resistance,” as reported at the Middle East Eye.