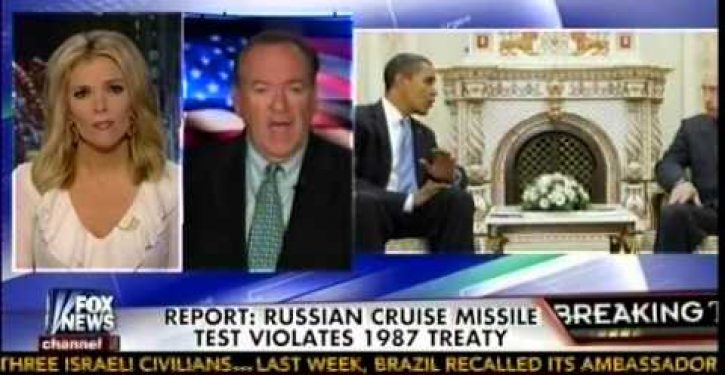 Americans learned Monday that Russia has been in violation for years of a 1987 arms treaty. Also on Monday, President Barack Obama finally responded with a strongly-worded letter to Russian President Vladimir Putin, before embarking on a three-week family vacation to Martha’s Vineyard.

The treaty’s terms, which limits cruise missile testing, was hammered out by then-presidents Mikhail Gorbachev and Ronald Reagan. Those terms have been flaunted by Russia for years, apparently with full knowledge of the Obama administration, according to Fox News, which reported:

President Obama informed Russian President Vladimir Putin in a letter Monday of the U.S.’  determination that Russia broke the agreement. The official said the U.S. is prepared to engage in “senior-level bilateral dialogue immediately” with Russia with the goal of assuring Washington that Moscow will return to compliance with the treaty.

“The United States is committed to the viability of the I.N.F. [Intermediate-Range Nuclear Forces] Treaty,” the official said. “We encourage Russia to return to compliance with its obligations under the Treaty and to eliminate any prohibited items in a verifiable manner.”

The Russians have been engaged in prohibited missile testing as early as 2008, and that activity was first flagged by the United States as possible treaty violations in 2011, according to a report published Monday in The New York Times.

Top Israeli official to Obama: ‘Get lost!’ Translation: Take a hike, beat it
Next Post
Cartoon of the Day: Gaining perspective on the border crisis