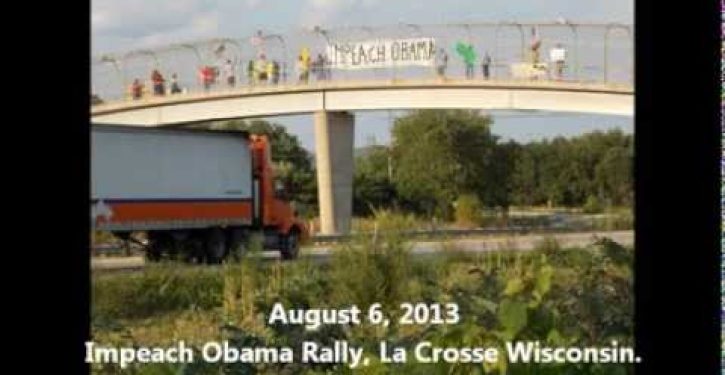 Police Chief Tim Kelemen of the Town of Campbell, Wisconsin has always seemed to hold a grudge against the Tea Party and the Overpasses for America groups.

In what appears to be a slap on the wrist, Kelemen pleaded “no contest” Friday to a misdemeanor count of “unlawful use of a computerized communication system” after he signed up local Tea Party leader Greg Luce for “gay dating, pornography and federal health care websites” as reported at the Examiner.

James Neighbors, founder of the patriot group “Overpasses for America,” said, “[T]he fact he was only charged with a misdemeanor is a travesty of justice.” Jim Birnbaum, Kelemen’s attorney said, “There is no basis for any type of allegation for felony criminal activity. None.”

Kelemen also “used Greg Luce’s email to establish profiles on Match.com and Selectquote.com to generate harassing solicitations, according to police investigation reports,” as reported at the LaCrosse Tribune.

“The same Internet addresses used to access those sites also visited sexually explicit pages. A computer user on the town’s computer and from Kelemen’s home also posted negative comments about Luce on the Tribune’s website using the handle “Bill O’Reilly,” according to investigation reports.”

Although the news reports have framed Kelemen as getting back at Luce for a federal lawsuit, the truth is that even before the lawsuit, the Police Chief “persuaded” the town board to create an ordinance specifically targeting the Tea Party and the Overpasses for America groups.

In a video posted of the deliberations, town supervisor David LaFono cited safety for the ordinances.

The ordinance passed over objections in October, after the town treasurer called 911 on August 6, 2013 claiming that there were “rioters” on the public walkway above the highway, where the groups held flags and signs. The patriot groups were horrified and repeatedly attempted to talk sense into the town board, whose unconstitutional ordinance clearly was an infringement on their First Amendment rights. Finally, the groups filed a federal lawsuit against the Town of Campbell, which is pending and is being handled by the Thomas More Law Center.

Liberty Unyielding reported back in December, two months after the ordinance passed, that the patriot groups defied the ordinance in frigid temperatures, resulting in several citations.

As far as Police Chief Kelemen, he is on paid leave. The Police Chief said he “didn’t realize the conduct was illegal.”

British Army deploys ‘pocket drones’ in Afghanistan
Next Post
Chicago: More anti-Semitism, in school and beyond