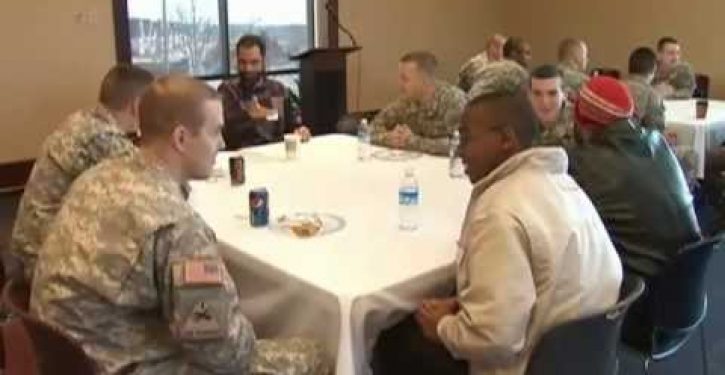 My colleague Michael Dorstewitz posted earlier today on the Missouri National Guard’s decision not to show up to be honored by children in a vacation Bible school class.  The Guard sent this message to the Baptist church that issued the invitation:

A somewhat similar situation arose in North Carolina in 2010, when the North Carolina National Guard decided it had to decline the invitation from a Baptist church in the Winston-Salem area to participate in a community Independence Day celebration being hosted by the church.  The Guard was asked to provide an honor guard to bear the flags for the celebration, which was to be patriotic and not religious in nature.  But the Guard hierarchy, citing the same regulation invoked in Missouri, determined that it could not be done.

Michael Dorstewitz included a Tweet from Sarah Palin in which she pointed out that the military now marches in gay pride parades – including official participation with the provision of a color guard – but can’t send troops to accept patriotic appreciation from children in a church.  In the formulation of the Missouri National Guard, the military can be seen as sponsoring homosexuality, but can’t be seen as sponsoring the Baptist religion.

The interesting thing, however, is that the military apparently can be seen as sponsoring the Muslim religion.  Consider, for example, an expedition by members of the Ohio National Guard to an Islamic center and mosque in Hilliard in February 2012 (see here, here and here).  The reservists were in a civil affairs unit and would serve as liaisons to the local nationals when deployed overseas (e.g., to Afghanistan).

As seen in the video (the wide shot at the very end), there was no problem with parking a row of Humvees outside the mosque.  (Bringing a Humvee to the Baptist church was one of the things the Missouri National Guard deemed prohibited.)  A number of photographs show women soldiers wearing headscarves.  In one photo, the Guardsmen stand in formation outside the mosque.

Or consider the program reported in 2013 at Lackland Air Force Base in San Antonio, in which airmen are required to attend a familiarization course at the Islamic center on the base.  Reportedly, the course includes attending services in the mosque.  There are no such requirements levied on airmen for familiarizing themselves with Judaism or Christianity.

Of similar interest is the visit of U.S. Military Academy cadets to an Islamic center and mosque in Jersey City (NJ) in April 2012.  See here as well.  During the three-day “crash course,” cadets received instruction from Muslim teachers and attended services.  Cadets have been participating in the course since 2007 (see links below); the videos and photo below are from the 2011 visit.

Here the cadets receive a lecture about Mohammed and Muslim beliefs (in 2011):

Here, they are lectured on the succession after Mohammed, and Mohammed’s democratic approach of not naming a successor (according to Sunni belief):

Cadets made the same indoctrination visit to Jersey City in 2008.  According to the New York Times story, the visit included stops at an Egyptian Coptic church, a synagogue, and a Hindu temple.  The cadets stayed at the Islamic center instead of a hotel, and attended services at the mosque.  The photo featured in the story shows the cadets in uniform at the Islamic center, reflecting an apparent lack of concern by the Army that their presence would imply Army sponsorship of the Muslim religion.

According to the logic cited by the Missouri National Guard, we might imagine that the U.S. military was sponsoring a religion based on the command-sponsored activities outlined here.  But at least it doesn’t let soldiers and Humvees show up in churches where children are attending vacation Bible school.