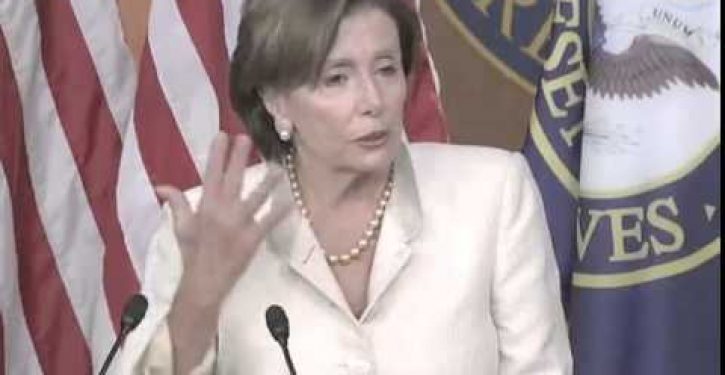 Now she’s a machine, spinning out the biblical references like a demented app.

On Tuesday, Nancy Pelosi was on MSNBC’s Morning Joe comparing illegal immigrants to Baby Jesus, who in her words was a “refugee from violence.”  (It wasn’t clear who America is supposed to be in that analogy.  Egypt?  Mary and Joseph?)

For her next trick, Pelosi has hauled in Moses to wring our hearts over the plight of illegals.  Apparently, one of them may end up delivering the next set of Commandments from the Almighty.  Or something.

“What would we do if Moses had not  been accepted by the Pharaohs family?” she asked and answered, saying “We would not  have the Ten Commandments for starters. You understand my point, historically we have a challenge and we have examples of humanitarian assistance that should guide us.”

Well, sure.  Pharaoh’s daughter, the one who rescued Moses from the Nile, was providing “humanitarian assistance” to a refugee.  Oddly enough, the “refugee” situation arose because her father had issued an edict that the newborn sons of the Hebrew women who lived in his land were to be killed. (Exodus 1:16)  It’s a little hard to square that with the thesis about Moses being “accepted by the Pharaoh’s family.”  In this particular analogy, moreover, it would seem that someone other than the United States fills the role of Pharaoh’s daughter, although it’s hard to pinpoint exactly who it is (the wives or daughters of cartel leaders?).  Maybe it’s just that we have to rely on America to make sure those next Commandments get through.

NANCY PELOSI HAS LOST HER MIND: Border Kids Are Like Moses http://t.co/zoQze0qnRC

And because we’re your full-service LU Nation hub, this post is a two-fer: a Tweet of the Day and the video of Nancy Pelosi in full-frontal rant mode.

Bonus footage:  With Pelosi’s fascinating analogy going viral, alert web editors have loaded a lot of images of Charlton Heston as Moses today.  For a palate cleanser, consider instead this passage from Mel Brooks’s venerable History of the World, Part I: