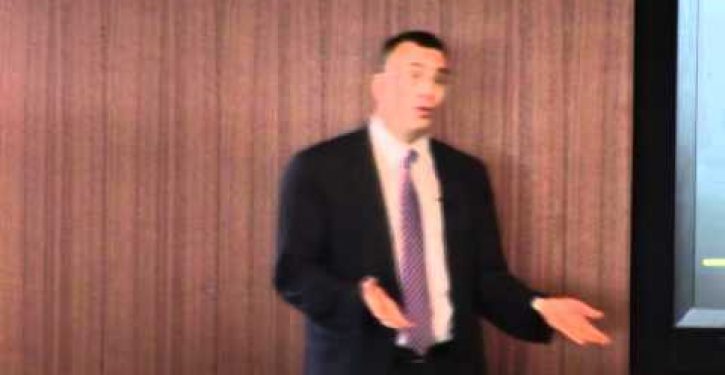 Update: Mr. Gruber tried to “explain” his earlier comments about the subsidies, and only ended up digging himself in deeper. See even more evidence at the end of this post.

A senior Obamacare architect now claims that limiting subsidies for private health insurance under the act to only state-run exchanges was merely a “typo” in the bill — one that the IRS attempted to patch up with a rule change. However, a two-year old video clip depicts the same man claiming the exact opposite — states that hadn’t set up exchanges were purposely excluded.

The District of Columbia Circuit Court of Appeals ruled earlier this week that a clear reading of the Affordable Care Act indicates that subsidies for private health insurance were limited only to state-run health exchanges, according to Reason.

Chris, it is unambiguous this is a typo. Literally every single person involved in the crafting of this law has said that it`s a typo, that they had no intention of excluding the federal states. And why would they? Look, the law says that people are only subject to the mandate if they can afford insurance, if it`s less than 8 percent of their income. If you get rid of these subsidies, 99 percent of the people who would get subsidies can no longer afford insurance, so you destroy the mandate. Why would Congress set up the mandate and go through all that political battle to allow it to be destroyed? It`s just simply a typo, and it`s really criminal that this has even made it as far as it has.

Here’s a clip of that exchange:

However, in January of 2012, Gruber told a gathering at Noblis Network, a nonprofit research corporation headquartered in Falls Church, VA., that the drafters purposely denied Obamacare subsidies to residents of states that hadn’t set up health care exchanges in order to get those states to toe the line.

“What’s important to remember politically about this is if you’re a state and you don’t set up an exchange, that means your citizens don’t get their tax credits” he told the gathering. “But your citizens still pay the taxes that support this bill. So you’re essentially saying to your citizens you’re going to pay all the taxes to help all the other states in the country.”

Here’s the pertinent part of his presentation:

President Obama is going to be mad as hell whenever he finally hears about this on the news: http://t.co/Nh0pqvtbJW

My parents always told me if you just stick to the truth — no matter how difficult it may be at the time — you’re not likely to get tripped up later on. Gruber’s parents apparently had a different philosophy.

* UPDATE *: Since this story first broke, Gruber told The New Republic that he merely misspoke at the 2012 presentation.

Jonathan Gruber tells TNR he doesn’t believe what he said on Ocare exchanges in 2012: ‘I was speaking off-the-cuff. It was just a mistake.’

Fair enough — we all make mistakes. The problem is, he made exactly the same mistake at another event, all of which would lead a reasonable person to assume it wasn’t a mistake at all.

Also, it turns out it was not the only time he made such a statement. An audio clip from a public appearance Gruber made at the Jewish Community Center of San Francisco on January 10, 2012 reveals he made the same connection between subsidies and state-based exchanges on at least one other occasion (hat tip to MorgenR).

Listen to the audio below. He’s not stumbling over his words. He sounds very self-assured — just as he did in the 2012 video.

One final note: Gruber’s statement in the audio, unlike the video, was not in response to a question. He was not speaking extemporaneously — these were prepared remarks.

Cartoon of the Day: Leadership in motion
Next Post
Iran’s Supreme Leader wants friends of Palestine to ‘arm the West Bank’