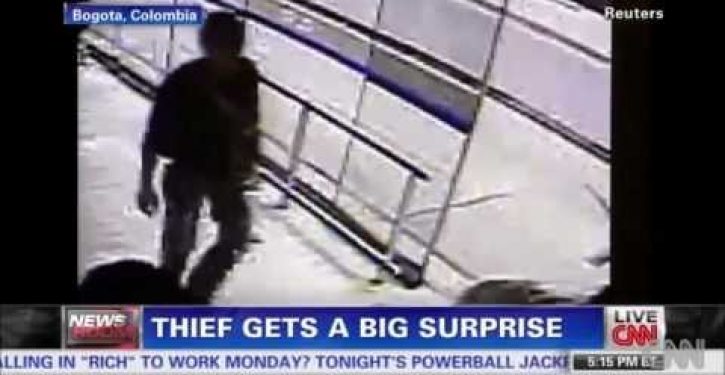 Inquistr, our source for today’s morality tale, calls its Karmic retribution, but we prefer a coinage used by our headline writers here at LU and dub it cosmic justice. Either way, the story demonstrates that crime doesn’t pay or maybe, alternatively, that it does pay but that the fruits are bitter.

The video that follows captures a brazen midday mugging in Colombia. On the side of good, or at least neutrality, is a woman standing on a platform at a bus station minding her own business, texting. On the side of evil is a common thief, who not only grabs the woman’s cell phone out of her hands but wrestles with her for control of it. Ultimately, he prevails in the struggle but then “gets his,” as they say.

While the imagery is quite graphic, police report that the man miraculously sustained only minor injuries despite being hit by a moving bus, reported CBS Local. But what is even more surprising is that the video footage shows something that is incredible.

The woman who the robber robbed is among the people to quickly respond to the apparent tragedy and she is the one who pulls him out from under bus. Maybe she wanted to retrieve her phone, but her actions are nothing short of heroic.

The identities of the victim and the villain have not been revealed, but a police report indicates that the thief was immediately rushed to a nearby hospital where he was treated for minor lacerations. He was then placed under arrest.

Z Street: The case that could blow the lid off the IRS scandal
Next Post
Well, this is huge: Obamacare subsidies ruled illegal