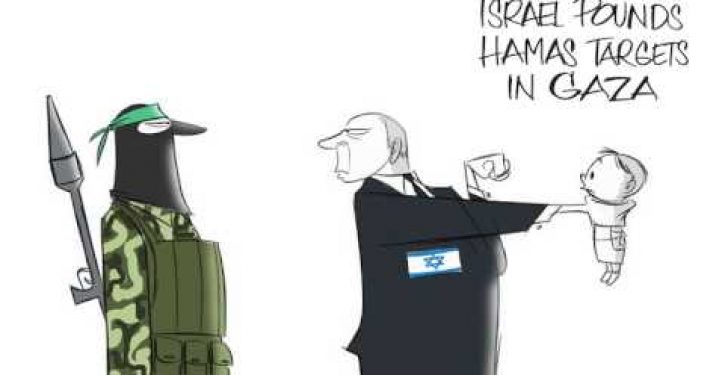 The Washington Post published a cartoon Wednesday that went way over the line — even for The Post. It depicts Israeli Prime Minister Benjamin Netanyahu repeatedly punching a Palestinian infant, and it has at least one prominent Jewish organization hopping mad.

The cartoon, published on YouTube and created by Post editorial cartoonist Ann Telnaes, includes as a description, “Gaza civilians are the victims of both Israeli and Hamas’ actions” — nothing more.

From that description, one would assume the cartoonist takes the position that blame should be assigned equally between Hamas and Israel. Yet Netanyahu is the only person doing the punching.

The Simon Wiesenthal Center declared its outrage over the cartoon. In a statement released to news agencies on Friday, the center’s associate dean, Rabbi Abraham Cooper, said the clip was “disgusting.”

“It is disgusting that The Washington Post would present an animated cartoon that is so profoundly removed from the truth,” said Cooper, The Post reported. “Millions of Israeli citizens—men, women, and children—have been forced into bomb shelters and saferooms by thousands of missiles and rockets targeted at them by Hamas terrorists, whose open and avowed goal is the destruction of the Jewish state.”

While Hamas has engaged in a practice of using non-combatant women and children as human shields, the Israeli Defense Force has taken extraordinary measures to prevent civilian casualties.

Even Israel’s enemies have recognized that Israel’s military countermeasures against Hamas have included phone and text warnings as well as leaflets urging innocent civilians in Gaza to vacate the targeted areas. It is the Hamas leadership that openly uses the people of Gaza to act as human shields to protect their weapons of mass destruction.

“Israelis are saddened by the deaths of four Palestinian children on a Gaza beach yesterday, but the blood of these innocent children is on the hands of Hamas leaders, not Binyamin Netanyahu,” Rabbi Cooper also said.

Here’s the cartoon, via The Washington Post. What do you think? Over the line?

Cartoon of the Day: An administration that has gone to the dogs
Next Post
Romney again? Really?