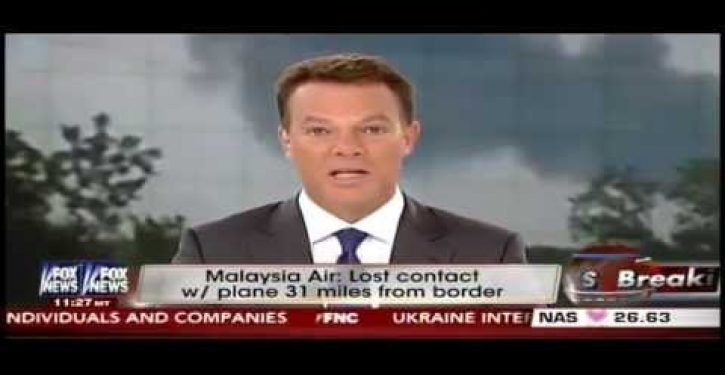 Wearing her trademark giant faux-turquoise stones like a talisman, Jen Psaki kicked off the State Department daily briefing on Thursday with a perky riff on the vote totals from the recent election in Afghanistan.

And that was a little too much for Fox News anchor Shepard Smith, who had had a perfectly natural expectation of hearing the State Department spokeswoman say something about — oh, you know, maybe the commercial airliner that was shot down this morning over Ukraine with 295 people onboard.  Something like that.

When Smith’s broadcast started, the Israel Defense Force hadn’t launched its invasion of Gaza quite yet.  So as far as American news-watchers knew, the airliner shootdown was the biggest story of the day.  But Ms. Psaki didn’t address it in her opening remarks.  A disgusted Smith cut back to himself and let loose with expressions of incredulity.  (Video below.)

Allahpundit mused earlier on this, citing a commenter at Ace of Spades who thinks the Obama administration is just on overload and has lost its ability to function:

Obama doesn’t know what to do or say about Russian separatists shooting down a passenger jet, so he goes on his burger run and gives a 60-second perfunctory statement. If he’s calm and treats it like no big deal, maybe everyone else will treat it like less of a big deal too. Psaki might be making the same move. If the White House isn’t treating this like a crisis, it’s unfair to expect them to do much about it, right?

But AllahP sees something else too:

I think you’re also seeing in O’s and Psaki’s responses how invested the White House is in pushing its daily “message” to the media, no matter what else is going on in the world. Psaki’s job today was to spin Afghanistan and, darn it, she was going to spin it, no matter how many bodies are scattered across eastern Ukraine. Obama did the same thing in his Delaware speech earlier this afternoon, segueing easily from the crash to babbling about infrastructure spending. They’re in control of the narrative, not the media — or at least they want to be.

And there’s probably something to that.  I would say, in fact, that the whole Obama administration is an emblem right now of the Western left’s privileged insulation from reality.  It lives in a proud tower that can’t stand much longer.

The Ace commenter’s analysis is what I would call the “Norman, coordinate!” theory: the idea that the administration is just shutting down, in a failure cascade, starting to emit smoke and the smell of burned wiring.  From the standpoint of the U.S. administration’s normal functions, especially in other nations’ lives, that might as well be what’s going on — at least to an extent.

But the theory of disengaged narcissism seems to fit better with the fact that Team Obama does still get done what it wants to get done.  It presses a message of racism, class envy, and other forms of invidious annoyance on the public; it keeps finding new citizens to attack with federal agencies; and it keeps raising money like a demented Energizer Bunny, surging with its mechanical whine through the hotel ballrooms and dining salons of America.

For witnesses in the last five years, it’s been like scrolling through 400 years of Roman history at once, with a dozen different vicious emperors and every sort of moral collapse flashing before our eyes in accelerated motion.  The aptness of the analogy is enhanced, in fact, by the tinny, YouTube-enabled rumble of the barbarians on the move outside our unguarded gates.

How much worse can it get than the State Department ignoring by far the biggest foreign-policy situation of the day in its daily briefing?  Is there anyone who doubts that we’re going to find out?  Speaking of the concept of discouraging thoughts, however, Victor Davis Hanson happened to write today about 2014 being the summer when America fell apart.  And here’s how he ended his essay:

What keeps the country afloat this terrible summer?

Some American companies produce more gas and oil than ever despite, not because of, the Obama administration. Most Americans still get up every day, work hard, and pay more taxes than they receive in subsidies. American soldiers remain the most formidable in the world despite the confusion of their superiors. The law, regardless of the administration, is still followed by most. And most do not duck out on their daily responsibilities to golf, play pool, or go on junkets.

It is still a hard thing to derail America in a summer — but then again, we have a long way to go until fall.

Think about that.  Will there not be an opportunity in this for many of today’s ill-educated Americans to realize that the federal government isn’t what keeps their lives, and the business of the nation, going?  That what it all boils down to is the people?  And that we are, in fact, a good thing that our government is attacking and trying to bring down, rather than being a bad thing that our government has to repair and haul upward, stomping on anything in its path?

Something to ponder while you’re waiting for the State Department to prepare its remarks on the end of the world.