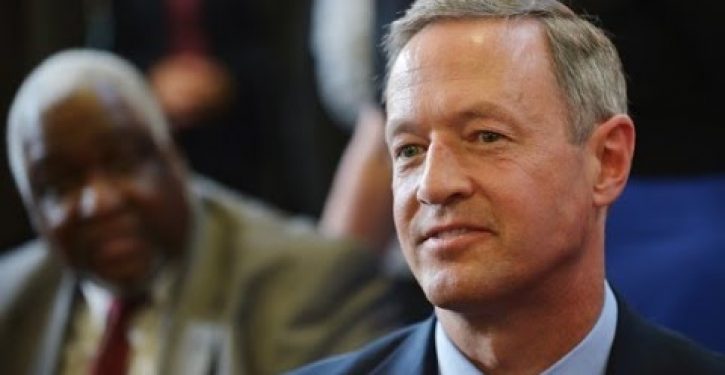 Maryland Gov. Martin O’Malley, a Democrat, has a real soft spot for the thousands of minor children illegally crossing our southern border, but he has one request of the administration — just don’t send them to his state.

Last week O’Malley actually criticized the Obama administration’s plans at that time to return the unaccompanied children to their country of origin, according to CNN, which reported:

“We are not a country that should turn children away and send them back to certain death,” O’Malley said last week at a National Governors Association meeting in Nashville.

But later, when a site in his state was under consideration, O’Malley started frantically backpedaling. According to sources quoted by CNN:

Watch the news clip, via CNN.

But O’Malley shouldn’t be criticized too much — he’s merely following the same skewed, hypocritical line of reasonng liberals have employed from the beginning: Let’s raise taxes and regulate what we can and cannot do — just don’t make it apply to me.

For example, U.S. Sen. Dianne Feinstein, D-Calif., is the Senate’s most vocal proponent of gun control. In fact, she one said she’d like to outlaw them entirely — yet she possesses a concealed carry permit, according to Breitbart News.

Here’s another one. The late Sen. Edward “Ted” Kennedy and his nephew, environmental activist Robert F. Kennedy Jr., agreed that “green energy” sources — such as solar, hydro, geothermal and wind — were preferable to energy produced by fossil fuel.

And when the Bay Wind wind farm was proposed in Nantucket Sound, they came to another agreement — not in my backyard!

The younger Kennedy wrote that the wind farm would destroy a precious natural resource — the beauty of the sound, in a New York Times op-ed.

As for the late senator, Republican Louisiana Governor Bobby Jindal said in his 2010 book, “Leadership and Crisis”:

Even where a good location exists, green energy projects are often opposed by their supposed liberal champions. A case in point is the windmill project off Cape Cod, Massachusetts, that was opposed by members of the Kennedy family who reportedly didn’t want the view spoiled from their nearby compound. After eight years of lawsuits and government studies, the federal government finally approved the project in May 2010. Liberals may support green energy in theory, but in practice they all too often shout NIMBY–Not in My Backyard.

Getting back to O’Malley, his name has been bandied about as a possible dark horse presidential candidate for 2016. After this, his horse may have gotten a bit darker.

Will donors punish GOP outliers on Holder-friendly election law?
Next Post
White House, a law unto itself, defies congressional subpoena