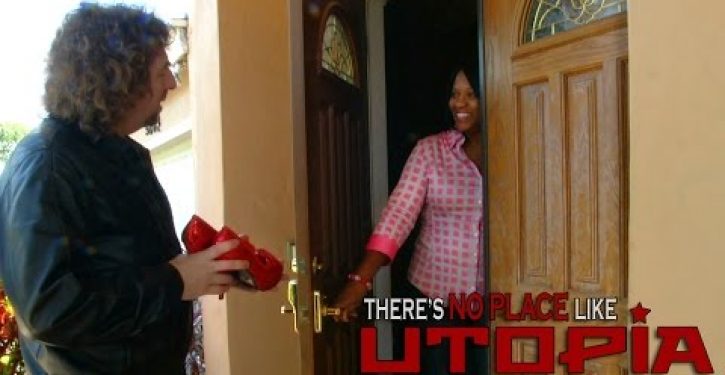 A documentary filmmaker tracked down a Florida woman who had to be President Obama’s most ardent and enthusiastic supporter during his first bid in 2008. Guess what? Six years later, her ardor has cooled and her enthusiasm has waned.

Everyone should remember Peggy Joseph’s jubilant words, recorded at a Florida campaign rally after Obama delivered his speech.

Filmmaker Josh Gilbert, best known for producing “a/k/a Tommy Chong,” filmed a much more subdued Joseph in preparation for his new film about the Obama administration’s promises called, “There’s No Place Like Utopia.”

Gilbert arrived at Joseph’s home with gift in hand — a pair of ruby slippers, reminiscent of “The Wizard of Oz.” Gilbert compares Obama to the wizard in in his film — promising the world but delivering nothing.

The filmmaker asked her whether the president came through for her like she’d expected.

“Absolutely not!” Joseph said. “Mortgage got worse and gas prices got higher … At that time we needed a change but a change for the better not the worse.”

She also made a startling admission. She said she began educating herself on politics and came to the conclusion that she’s a conservative.

“What I learned is never trust the wizard,” she told Gil;bert. “It’s within ourselves to have the determination — to have the courage and the brains to bring us to our destiny.”

Here’s the clip of the Joseph interview.

And here’s a trailer from the upcoming documentary, “There’s No Place Liker Utopia.”

Shame on Capitol Hill: The political cable fix is in
Next Post
Washington Post calls out Obama on his latest lie