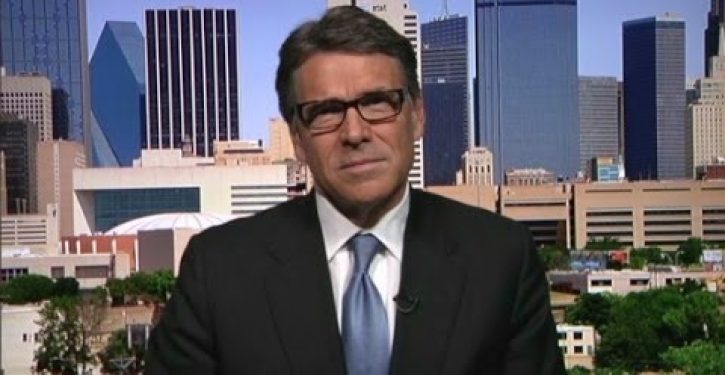 President Obama once again refused Texas Governor Rick Perry’s invitation to inspect the U.S.-Mexican border firsthand, stating that “I’m not interested in photo-ops.” Really? Since when?

Perry appeared Thursday on CNN to discuss his Wednesday meeting with the president and was asked about Obama’s statement that a border visit would amount to nothing more than “theater,” which he claimed no interest in.

“The American people expect to see their president when there’s a disaster,” Perry answered. “He showed up at Sandy, why can’t he show up at the border in Texas?”

The “Sandy” reference was to Hurricane Sandy, which ripped through the Jersey shore in late October, 2012. On Oct. 31, 6 days before the 2012 presidential election, Obama met with New Jersey GOP Governor Chris Christie in Brigantine to inspect the damage left by the superstorm.

Here’s the exchange between Perry and “New Day” anchor Kate Bolduan, via CNN.

Most viewers ignored the obvious philosophical differences between Perry and Obama and zeroed right in on the president’s odd comment that he wasn’t interested in the “theater” that a photo-op entailed.

When Perry invited Obama to tour the border late last week during the president’s current Texas fundraising tour, the president responded by suggesting a photo-op handshake on the airport tarmac.

Moreover, Obama’s entire presidency has been marked by selfies and photo opportunities. The Twitterverse was only too happy to point this out — and the Twitchy team was there to record all the tweets.

@seungminkim @joseiswriting Translation: I’m not interested in THAT photo op.

The remark earned a double-take and tweet from attorney and political consultant Sarah Humph:

Wait. The same president who tweets photos of himself to commemorate all holidays & historic events says #ImNotInterestedInPhotoOps ? LOL ok

Then the examples started pouring in:

Twitchy included photo ops from the White House itself:

All in all, I think John Stewart was right: It’s not photo-ops the president destains — it’s this particular photo-op.

Read more tweets and check out more examples at Twitchy.

Border skirmish update: No more flights from Texas to California for now
Next Post
They lie: Yahoo falsely indicates Obama has visited the border in Texas