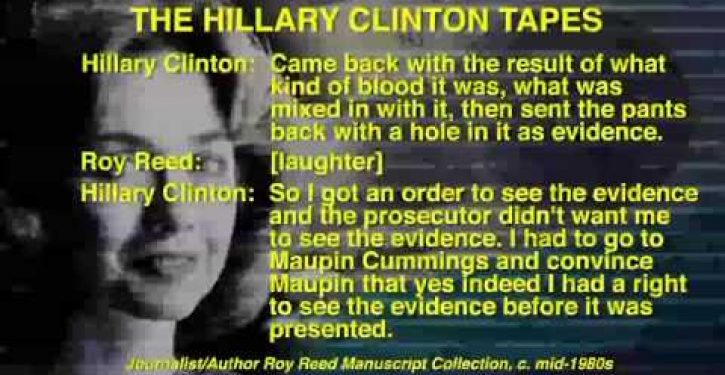 In an unfolding story that isn’t getting all that much attention from the American mainstream media, Breitbart.com is reporting on July 7, 2014 that former US Secretary of State, former US Senator from New York, former First Lady of the United States, and the current presumed front runner for the 2016 Democratic Party’s presidential nomination, has amended the re-telling of her lawyering days, when she managed in 1975 to get a convicted child rapist off with time served.

Reporter Alana Goodman of the The Washington Free Beacon broke the story June 15, 2014, after she obtained an interview of Clinton tape-recorded by Arkansas reporter Roy Reed. Never made public, the interview was conducted on again/off again by Reed from 1983-1987. At the time, Mrs. Clinton was a practicing lawyer in Little Rock and wife of then-Arkansas Governor Bill Clinton.

Held in the archives of the University of Arkansas at Fayetteville, the five hours’ worth of interviews were initially intended for an Esquire magazine profile of Mrs. Clinton. For whatever inexplicable reason, the tapes never saw the light of day until unearthed by The Free Beacon’s investigative reporter.

As seen at the end of the video provided, Mrs. Clinton laughed about the case of Thomas Alfred Taylor, a 41-year-old accused (and eventually convicted) of raping a 12-year-old girl after luring her into his car. Clinton admits during the interview that she accepted joining Taylor’s legal team “as a favor” for prosecutor Mahlon Gibson.

The Free Beacon’s Goodman also revealed that in a July 28, 1975, court affidavit, Mrs. Clinton made note that she had discovered the victim was “emotionally unstable” and had a “tendency to seek out older men and engage in fantasizing.” The future First Lady also informed the court that “I have also been told by an expert in child psychology that children in early adolescence tend to exaggerate or romanticize sexual experiences and that adolescents in disorganized families, such as the complainant’s, are even more prone to exaggerate behavior.”

Not quite done unloading on the 6th grader, Clinton said the victim had “in the past made false accusations about persons, claiming they had attacked her body,” and that the child “exhibits an unusual stubbornness and temper when she does not get her way.”

As also recently uncovered, reporter Josh Rogin of The Daily Beast claims he interviewed the now 52-year-old victim of the rape. Speaking on grounds of strict anonymity, the victim claims Mrs. Clinton smeared her and used dishonest tactics to successfully get her attacker off with a light sentence—even though, she claims, Clinton knew he was guilty. The woman bluntly stated, “Hillary Clinton took me through Hell.”

But in a recent interview with the British parenting website Mumsnet, Clinton now claims that she never took the case as a favor for a fellow lawyer, but rather was a court-appointed lawyer for the defense. Mumsnet also questioned Clinton regarding her notes to the court when she referred to the 12-year-old girl as “emotionally unstable.” Clinton changed the narrative to claim that she only “suggested she [the victim] was from an unstable home and therefore may have exaggerated the incident.”