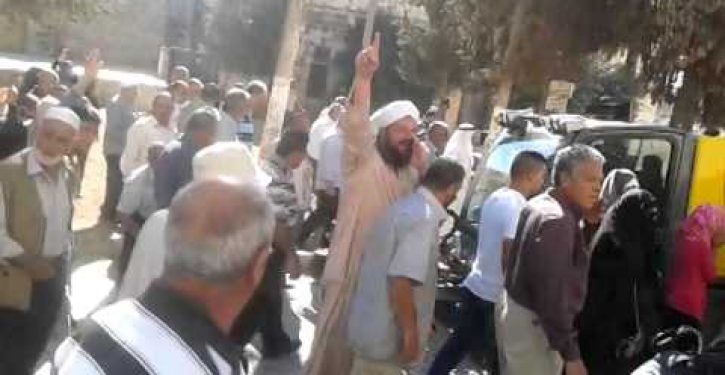 Bret Stephens asks at the Wall Street Journal, “Where are the Palestinian mothers?”

The headline question is rhetorical, summing up the questions raised about Palestinian Arab society when its mothers speak like this of homicidal actions by their children:

The Israeli government has identified two prime suspects [in the kidnapping and murder of the three teen boys on 12 June], Amer Abu Aysha, 33, and Marwan Qawasmeh, 29, both of them Hamas activists. They are entitled to a presumption of innocence. Less innocent was the view offered by Mr. Abu Aysha’s mother.

“They’re throwing the guilt on him by accusing him of kidnapping,” she told Israel’s Channel 10 news. “If he did the kidnapping, I’ll be proud of him.”

For more on her expression of maternal pride, see here.  Stephens continues:

It’s the same sentiment I heard expressed in 2005 in the Jabalya refugee camp near Gaza City by a woman named Umm Iyad. A week earlier, her son, Fadi Abu Qamar, had been killed in an attack on the Erez border crossing to Israel. She was dressed in mourning but her mood was joyful as she celebrated her son’s “martyrdom operation.” He was just 21.

Here’s my question: What kind of society produces such mothers? Whence the women who cheer on their boys to blow themselves up or murder the children of their neighbors?

Whence, indeed?  Solving the “whence?” question is beyond our reach in this post.  But thanks to the magic of modern technology, we actually know where the Palestinian mothers were during the agonizing days of the search for Eyal Yifrach (19), Gilad Shaar (16), and Naftali Fraenkel (16).  At least some of the mothers were at the Temple Mount, taunting visiting Israeli Jews with the “three-finger” gesture, which became popular overnight as a way of mocking the Israeli boys as “three Shalits.”  Watch to the end for a crowd shot of Palestinian mothers flashing the “three Shalits” salute.

The reference is to Israeli soldier Gilad Shalit, who was abducted by Hamas on 25 June 2006 (when he was not quite 20) and held captive for over five years.  Shalit was finally released in an exchange for more than 1,000 terrorist criminals in October of 2011.

Several sites have documented the “three Shalits” theme, which was pumped up through social media with images of people – many of them children – making the three-Shalits hand gesture.

As for the Palestinians and their inveterate sympathizers in the West, perhaps they should note that a culture that too often openly celebrates martyrdom and murder is not fit for statehood, and that making excuses for that culture only makes it more unfit. Postwar Germany put itself through a process of moral rehabilitation that began with a recognition of what it had done. Palestinians who want a state should do the same, starting with the mothers.

And, sure, we might as well have one last swipe at the Western-formulated touchstone of “Palestinian statehood.”  But I think more and more observers perceive, at this point, that the breakdown of common expectations among the world’s peoples is too far advanced.  One way or another, it seems, we will have to fight our way to a new point of stability.  And we cannot go back now.  There is only forward: forward to a new peace in which a mother’s heart is a haven and not a forge of terror.

SCOTUS upholds CA ban on psychological counseling aimed at turning gay minors straight
Next Post
Despite promise not to, Obama orders more boots on the ground in Iraq