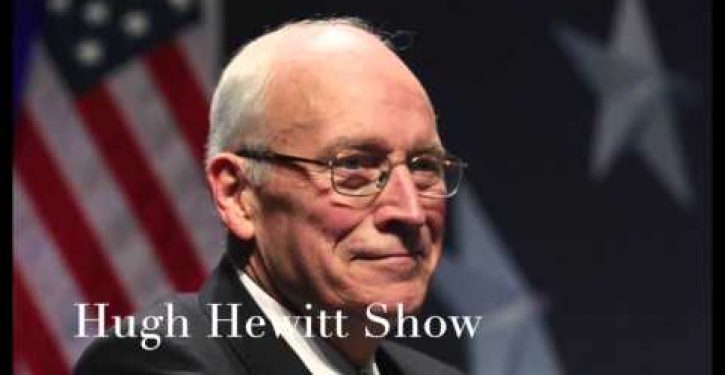 Appearing on conservative commentator Hugh Hewitt’s radio show Tuesday, former vice president Dick Cheney made a dire prediction. When asked if he thought the United States would survive “this decade without another massive attack on the homeland,” Cheney said:

I doubt it. I think there will be another attack and the next time I think it’s likely to be far deadlier than the last one. You can just imagine what would happen if somebody could smuggle a nuclear device, put it in a shipping container, and drive it down the beltway outside Washington D.C.

Cheney and his daughter Liz announced last week the launch of The Alliance for a Strong America, a “grassroots organization that will advocate for a restoration of American strength and power.” In a YouTube video describing the endeavor, the Cheneys speak of “the dangerous policies of the Obama Administration” and resolved to stay focused on “policies necessary to protect the nation.”

“Concerning the current situation in Iraq,” writes the Daily Mail:

[T]he Cheneys oppose the president’s plan for the uprising and are critical of his actions before the uprisings that allowed the jihadi group Islamic State of Iraq and Syria [ISIS] to grow.

Obama’s “rhetoric has now come crashing into reality,” they maintain. “Watching the black-clad ISIS jihadists take territory once secured by American blood is final proof, if any were needed, that America’s enemies are not ‘decimated.’ They are emboldened and on the march.”

As evidence, they cite a RAND study showing a 58% increase in the number of Salafi-jihadists between 2010 and 2013. “[I]n the face of this threat,” they say, “Obama is busy ushering America’s adversaries into positions of power in the Middle East.”

Cartoon of the Day: Meanwhile, back in Iran…
Next Post
CNN’s Anderson Cooper can’t bring himself to say the — er … v-word without tittering