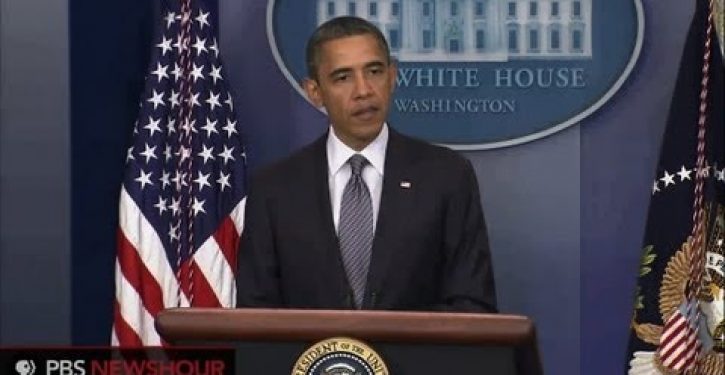 In 2011, President Obama was crowing to anybody that would listen about an arrangement he had facilitated to completely withdraw troops from Iraq:

As a candidate for president, I pledged to bring the war in Iraq to a responsible end…. After taking office, I announced a new strategy that would end our combat mission in Iraq and remove all of our troops by the end of 2011.… So, today, I can report that, as promised, the rest of our troops in Iraq will come home by the end of the year. After nearly nine years, America’s war in Iraq will be over. [Emphasis added]

A video showing how Obama singlehandedly brought the remainder of our troops home from Iraq follows.

The Washington Post summarizes the benefit to the President of making this claim, noting that “the fact he had withdrawn all U.S. forces from the country was a problem solved and a political chip to be cashed in come November.”

What the President was referring to was a Status of Forces Agreement, ratified by Iraqi lawmakers in November 2008, that stated in part:

All the United States Forces shall withdraw from all Iraqi territory no later than December 31, 2011.

Now that Iraq is burning, with major territories falling to Islamic insurgents, Obama has suddenly remembered that agreement and now places the blame for having no troop presence squarely on the shoulders of the Iraqi lawmakers.

Q: Just very quickly, do you wish you had left a residual force in Iraq? Any regrets about that decision in 2011?

PRESIDENT OBAMA: Well, keep in mind that wasn’t a decision made by me. That was a decision made by the Iraqi government. We offered a modest residual force to help continue to train and advise Iraqi security forces. We had a core requirement, which we were require in any situation where we have U.S. troops overseas, and that is — is that they are provided immunity at the — since they are being invited by the sovereign government there, so that if, for example, they end up acting in self-defense if they are attacked and find themselves in a tough situation, that they’re not somehow hauled before a foreign court. That’s a core requirement that we have for U.S. troop presence anywhere. The Iraqi government and Prime Minister Maliki declined to provide us that immunity. [Emphasis added]

Even the WaPo noted the President’s hypocrisy, saying the statement was surprising and reminding readers that Obama had boasted during his 2012 campaign about fulfilling his pledge to “end the war responsibly by withdrawing the last of the troops”:

President Obama surprised a few people during a news conference Thursday by claiming that the 2011 decision to withdraw all U.S. forces from Iraq, a politically popular move on the eve of an election year, was made entirely by his Iraqi counterpart. The implication ran counter to a number of claims that Obama has made in the past, most notably during a tight campaign season two years ago, when he suggested that it was his decision to leave Iraq and end an unpopular war.

Referring to it as an “implication,” when the video demonstrates it was an accusation or a definitive statement, is just a media device to avoid flat-out accusing the President of lying.

Here is the story’s transformation, summarized:

Perhaps the President should heed his own words when changing the facts surrounding foreign policy events. During the third Presidential debate in 2012, Obama reflected on one thing he had learned as commander in chief:

You’ve got to be clear, both to our allies and our enemies, about where you stand and what you mean.

DHS advises ‘alien children’ escorts: ‘As a rule, do not handcuff family units…’
Next Post
Aussies, Brits, and Yanks targeted in recruitment effort with message ‘jihad is cool’