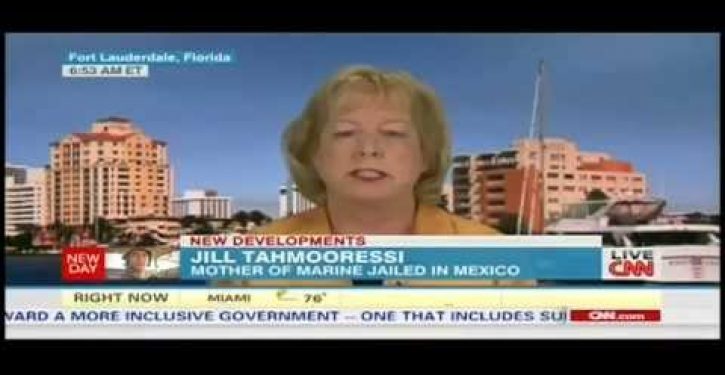 Let’s assume that the lack of an overt display of empathy from the first lady, who famously had herself photographed making a “sad face” and holding up a sappy sign when a slew of foreign children were kidnapped by terrorists, is not the result of racism this time. Let’s assume that she hasn’t made similar overtures over the Mexican government’s detention of American citizen and Marine Sergeant Andrew Tahmooressi because she has other fish to fry.

That still doesn’t excuse her husband’s lack of action. From the Washington Free Beacon:

The mother of the U.S. Marine imprisoned in Mexico for bringing weapons across the border said she has heard nothing from the White House or the State Department, despite far exceeding the signature requirements on her “We the People” petition, which should entitle her to an official response.

Marine Sgt. Andrew Tahmooressi says he crossed the border accidentally. He has been imprisoned for over two months.

CNN’s Chris Cuomo interviewed Tahmooressi’s mother about her son’s status, saying, “John Kerry told us on the show that they were helping. You circulated a petition that needed to get a certain number of signatures, you far exceeded it, like 123,000 people signed on, which means the executive should take notice of a situation. Have you heard anything from the president’s office? Have you heard anything from the State Department?”

“I have not,” Tahmooressi told him. “I did reach the 100,000 signature threshold, but that was May 30th, and I go on every morning, the first thing I do when I wake up, I go online. And I’ve not received a response yet on that WhiteHouse.gov petition site, so that is frustrating.”