Recently, my 91-year-old father-in-law and I were talking about the dire state of our nation, and he said, “I am sure glad I will not be around to see the end.”

My father-in-law is a great American patriot, who, as an Albanian immigrant, was processed through Ellis Island at the age of six. He often says the greatest gifts of his life were his family, his Catholic faith, and the opportunity to be American. In World War II, he was an engineer stationed at the Washington Navy Yard, where he worked on electronic circuitry for mines and torpedoes. After the war, he was recruited by the CIA. During several tumultuous decades he was a field operative fighting the Cold War in Europe, and then Vietnam and Laos. At his 90th-birthday party, he expressed utter astonishment that he had reached that milestone, given how many times he had cheated death during his career.

Considering his life experience, I was shaken to the core by his gratitude at the prospect of “not seeing the end” of America — not because I was surprised he said it, but because I totally agree that “the end” is coming and that my husband and I probably will be around to see it.

We are dismayed at the increasing secularization of a nation founded on Judeo-Christian principles, coupled with a political, social, cultural, economic, moral, and spiritual decline everywhere we turn. During the 2012 presidential election, there was much discussion among Republicans that if Obama won reelection it would signal “the end of our nation as we know it.” The theory was that our nation would not be able to withstand another four years of President Obama’s “transformative” policies. The biggest fear of all was that, since his name would never again be on the ballot, Obama would be empowered to do whatever he wanted.

So when Obama was reelected, there was a collective political depression of a kind I had never before witnessed. For weeks, people who voted against Obama, myself included, were just shaking their heads in disbelief: National decline was now inevitable, because Obama’s victory signaled the lack of will among Americans to repair the ship of state.

Thereafter, national decline became a normal, everyday discussion topic among my Baby Boomer friends. Invariably, casual talk of decline leads to the following questions: Do you own a gun? Are you stockpiling supplies? These questions always leave me and my husband asking, “Should we be more prepared?” But prepared for what? A total collapse of our society and economic system? A government takeover of our property and assets? A natural disaster of epic proportions? A terrorist attack even worse than 9/11? All of the above?

Given that I was born in 1955 and my husband in 1951, through the decades we have seen and experienced much national and international upheaval. Sure, when I came of age the government had a “credibility gap,” and the horror of Vietnam unfolded nightly on our black-and-white TV. There were riots, assassinations, social upheaval, and Watergate. But since we knew that our nation was built on a strong foundation, we believed, without a scintilla of doubt, that our future was bright and our nation would flourish. Amazingly, I don’t remember ever discussing any of these optimistic concepts; it was just built-in and assumed. Even much later in life, after the 9/11 attacks, I do not recall any talk about irreversible national decline. Instead, there was great optimism that our nation would emerge victorious against our enemies.

This great wave of negativity that has settled in during the last few years is therefore something new: a sense that “the end” is a matter not of “if” but of “when.” There is a feeling that our leaders can, at best, manage the decline, but are powerless to turn it around.

Do national polling data reflect the feelings of my father-in-law, my friends, my husband, and me, or are we just a bunch of pessimists?

It turns out our thinking is quite mainstream. The latest “right direction — wrong track” poll numbers indicate that only 28.3% of Americans believe our nation is heading in the right direction, while 63.5% say we are on the wrong track. An April 2014 Rasmussen poll revealed that 48% of Americans believe America’s best days are behind us, while 33% think our best days are still to come.

On the question of whether America is stronger or weaker, a Fox News poll from this past March revealed that 52% of registered voters believed that our nation has become weaker in the past six years, 29% said there has been no change, and 17% thought we have become stronger.

And now, as Iraq descends into chaos, there is a strong possibility that our 104-acre U.S. Embassy compound in Baghdad could be attacked in the next few days. This unstable situation has the potential to set off a chain reaction, in which our nation could be tested in other global hot spots by our enemies, who will be carefully watching how President Obama plays his hand in this crisis.

Will this new round of Middle East turmoil usher in more opportunities for our nation to be attacked? Most experts I hear say “yes.” Adding to the downward spiral, we have a commander-in-chief who is perceived as weak globally, but at home acts like an imperial president, ignoring Congress and the laws when convenient and politically expedient.

Are there strong signals that our ship of state is heading into a perfect storm?

Maybe my father-in-law was wrong; perhaps he will be around to see the end. 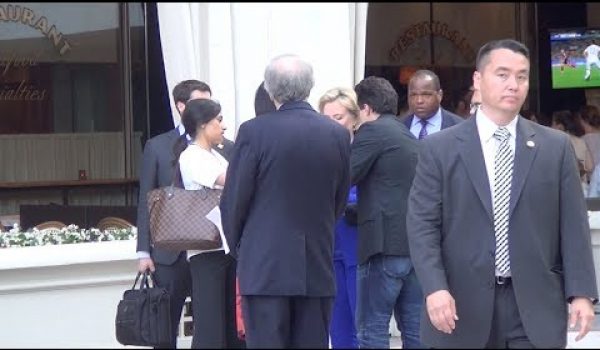 Video: Hillary asked to inscribe copy of her book to Chris Stevens
Next Post
Eric Holder’s ‘terrorism committee’ has identified the enemy, and it is us