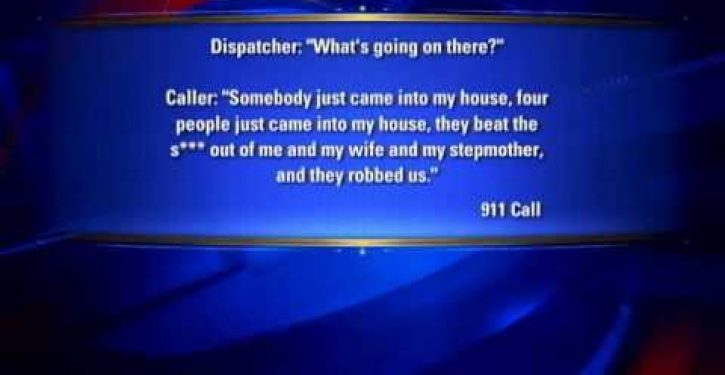 It sounds like a comedy routine, but a Pasco County, Fla., man isn’t laughing. The man, whose name is being withheld, phoned 911 after four robbers armed with guns broke into his home last week, demanding money and prescription drugs. The call was initially answered by a real live dispatcher, but when she attempted to transfer the call to police, she instead connected the victim with voicemail. “If this is an emergency hang up and dial 911,” the incredulous man heard through the receiver of his phone.

As can be heard in an audio recording of the 911 call provided by MyFox Tampa Bay, the situation was extremely chaotic, with much screaming and bleeped profanities.

According to Opposing Views, the man grabbed a gun and shot one of the four home invaders. That perpetrator, 33-yeard-old Steven Reverdes, was taken into custody by police, along with two other suspects, 31-yeard-old Joseph Rich and 31-yeard-old Michael Reverdes.

Late in the recording, the homeowner’s voice can be heard plainly, telling a police dispatcher:

A police report notes that the robbers, who entered the family’s home in the middle of the night, also fired shots at the homeowners. None of the residents appear to have been hit, though according to Pasco Sheriff Chris Nocco.

[The thugs] pistol-whipped [a female resident] and took a weapon and pointed it to the child and said they would kill the child if they don’t get what they want.

Police say they will make changes to the emergency call system to ensure that nothing like this happens again.