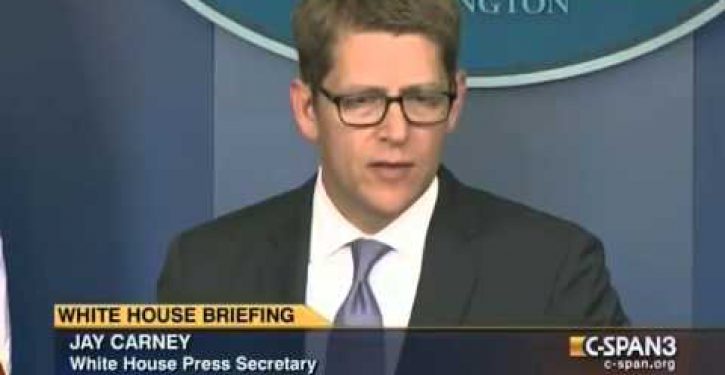 And Obama now: __________. Actually, that’s not fair. The White House does have a response to the current situation in Iraq. The video below features soon-to-be-former propagandameister Jay Carney spinning like a top in his efforts to answer a question at today’s press briefing by ABC News’s Jonathan Karl. First, Karl’s question:

Senior officials in this White House have repeatedly over the years, as recently as Tuesday, described the president’s top foreign policy accomplishments as ending the war in Iraq and decimating and destroying core al Qaeda. Given what we’re seeing now, can you still claim those are your signature achievements?

Carney, beset by a frenzy of fits and starts reminiscent of Obama himself, finally mumbles at around 1:00 that “ultimately Iraq’s future has to be decided through [pause] reconciliation.” The notion of the Iraqis “reconciling” their differences with a band of bloodthirsty guerilla terrorists would be amusing if it weren’t so tragic, especially in light of the sacrifice of American blood and treasure in the efforts of the last administration to bring true stability and self-reliance to Iraq.

Which brings us back to Obama’s claim in a speech he delivered at Fort Bragg in North Carolina on Feb. 27, 2009, a little more than a month after his first inauguration. A video of the speech, titled “Responsibly Ending the War in Iraq,” follows. In it, he observes that “it’s harder to end a war than begin one.” After declaring “success,” he goes on to boast that “we’re leaving behind a sovereign, stable and self-reliant Iraq, with a representative government that was elected by its people.”

The problem with both the speech and the strategy is that neither contains the word win, without which post-war stability in a region is an unattainable goal. By Obama’s own calculus, “ending the war” was a less cowardly-sounding substitute for “surrender” or “cutting and running.” There is nothing “responsible” about either.

This time, he created the mess out of a potential victory that he inherited.

Pentagon: Bowe Bergdahl to return to U.S. Friday
Next Post
Clinton, Perry, and the obsession of America’s media with ‘gay’ issues