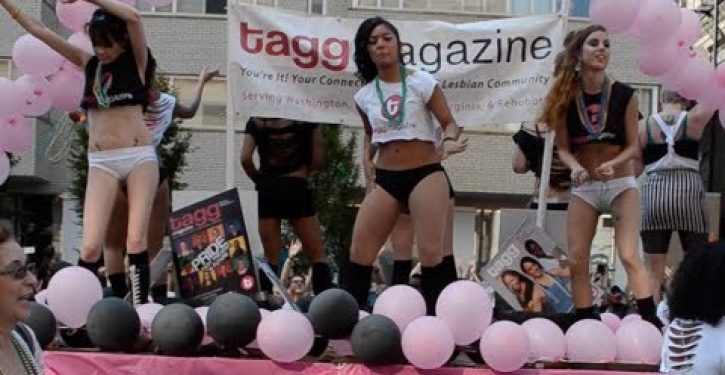 On Saturday, 7 June, a military color guard “made history” by marching for the first time ever in the Washington, D.C. Pride parade.

Reportedly, the parade organizers didn’t even ask the Department of Defense to provide a color guard this year.  They had made the request for several years running and always been turned down.  According to the Washington Post:

While no policy has precluded a U.S. Armed Forces color guard from participating in gay rights events since the 2011 repeal of the military’s “don’t ask, don’t tell” policy, gay rights organizations from D.C. to Hawaii say they have routinely faced rejection from local military offices, saying the color guards were otherwise occupied on the days of pride parades.

Lt. Cmdr. Nate Christensen, a Defense Department spokesman, said he could not confirm whether Saturday’s event was a first because decisions about military support for parades are generally made at the local level. Christensen said an Armed Forces color guard did perform on the grounds of the Pentagon last year for a Defense Department pride event, and another performed there again Thursday.

Golojuch said the group had grown tired of rejection and did not bother asking this year.

So DOD actually volunteered to participate on Saturday.

WaPo posted a letter to the editor Monday afternoon from a highly gratified parade-goer:

As my husband and I watched the Capital Pride parade Sunday, I found tears unexpectedly welling up in my eyes when the military color guard marched by.

I was living in San Francisco when Harvey Milk was assassinated and when the light sentence of his assassin resulted in the White Night riots. So to see the U.S. armed services and D.C. politicians proudly participating in a celebration of lesbians, gay men, bisexuals and transgender people vividly drove home how far we all have come. Pride indeed.

Mediaite collected video commemorations of the event, including the news spot by the local ABC affiliate.  ABC’s reporter also recorded the participation of D.C. schools and elementary school teachers, who recounted telling little girls in school that girls can, indeed, marry girls.

The second video is from News2share, and supplied the additional action photos from the parade for this post.

Although the color guard may have been a first, this wasn’t the first time uniformed servicemembers of the U.S. armed forces marched in a gay pride parade.  That occasion was documented in July of 2012 in San Diego.