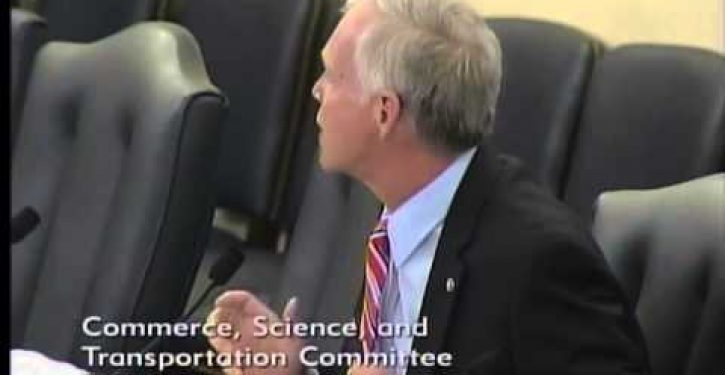 U.S. Sen. Jay Rockefeller, D-W.V., went way over the line Wednesday when he strongly suggested that U.S. Sen. Ron Johnson, R-Wis., was a a racist. When Johnson called him on it, Rockefeller doubled down rather than apologize.

“It’s very important to take a long view at what’s going on here,” Rockefeller said near the close of a Senate Commerce Committee hearing, adding:

And I’ll be able to dig up some emails that make part of the Affordable Care Act that doesn’t look good, especially from people who have made up their mind that they don’t want it to work. Because they don’t like the president, maybe he’s of the wrong color. Something of that sort.

Johnson was the sole Republican senator in the room at the time, and Rockefeller had made similar remarks directed at GOP members of Congress earlier this month. Johnson had heard enough.

“It was regrettable, and I would say it was offensive, seeing as I’m the only one in the room here really talking about opposition, that you would play the race card,” a visibly emotional Johnson said. “That you would say opposition to Obamacare necessarily must stream from some inherent racism. Very offensive. My opposition to health care has nothing to do with the race of President Obama.”

Johnson then laid out his objections to the Affordable Care Act.

“I didn’t object to this because of the race of the President,” he later added. “I objected to this because it’s an assault on our freedom. Mr. Chairman, I have to admit, I have a great deal of respect for you, but I’m the only one in the room, and I found it very offensive that you would basically imply that I’m a racist because I oppose this health care law. That is outrageous.”

The two continued to lock horns, but it didn’t end well.

“Please don’t assume, don’t make implications of what I’m thinking and what I would really support,” Johnson said. “You have no idea.”

“I actually do. And, you know, God help you,” Rockefeller replied.

“No senator, God help you for implying I’m a racist because I oppose this health care.”

“I must say, I have been behind closed doors with thousands of conservatives through the years. I have never once heard one of them say in the deep south or in the northeast or in South Boston, ‘Boy, I really hate Obamacare because that black president’ — no, I’ve never heard anybody come close to saying that,” Scarborough said. “And I have spoken to some wildly right wing groups. I have never heard it once.”

Scarborough appeared as upset about the accusation as Johnson did two days earlier.

“He’s the only Republican in the room, and Sen. Rockefeller suggested that millions and millions of Americans who opposed the Affordable Care Act, or Obamacare as the President likes it to be called, have racist reasons for doing that,” Scarborough said. “That’s one of the stupidest, most offensive things I’ve heard a sitting senator say.”
“He owes Ron Johnson an apology.”